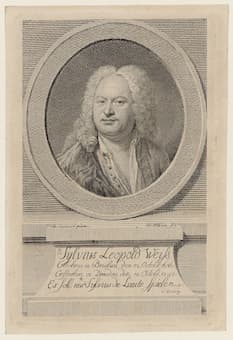 Compared to Bach by J.N. Forkel, Bach’s biographer, the lutenist Sylvius Leopold Weiss was described as a composer of “excellent and difficult compositions.” Another writer describes Weiss’ works for the lute as ‘the best, the soundest, the most galant and the most perfect.’ He was one of the most prolific composers for the lute in history and was the virtuoso lutenist of his day.

The Baroque love of the lute, particularly for lute song, was countered by those such as the historian Johann Mattheson, a friend of Handel, who sneered that if a ‘lutenist reaches the age of 80 he has certainly spent 60 years tuning.’ Weiss, however, was special. He was born in 1687 in Beslau and by age 20 was already at the court in Düsseldorf. He then went to Rome in 1708, accompanying Prince Alexander Sobieski of Poland. He returned to Germany in 1714 and was first employed at Kassel then again at Düsseldorf. He was friends with W.F. Bach and was said to have competed with J.S. Bach in improvisation. J.F. Reichardt told this story:

“Anyone who knows how difficult it is to play harmonic modulations and good counterpoint on the lute will be surprised and full of disbelief to hear from eyewitnesses that Weiss, the great lutenist, challenged J.S. Bach, the great harpsichordist and organist, at playing fantasies and fugues.” 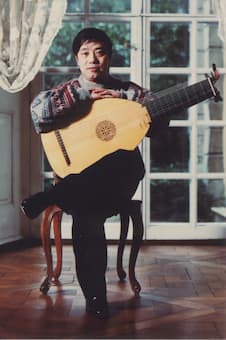 Dresden, and, in particular, the Dresden Court Orchestra, was internationally famous for its music. By 1718, Weiss was chamber lutenist in Dresden at the court of Augustus the Strong. The most famous musicians of the time, such as Veracini, Quantz, Heinichen, and Hasse were there. Bach wrote his Mass in B minor for the court. When summoned to Vienna to be employed by the court, Weiss declined and stayed in Dresden until his death in 1750, the same year Bach died.

Weiss’ death signalled the end of the era of the lute – no one who followed him achieved either his standing or his artistic level. At his death, Weiss left over a thousand works, only one of which had ever appeared in print. The rest remained in manuscript.

His lute style was a combination of French style, writing his compositions as suites and using the French style brisé, and of Italian style, with clear structure, lovely melodies, and, in general, being more imaginative and spontaneous than just the French style general permitted. His works are German, however, for their intrinsic rhetoric. One commentator summed it up, saying: ‘Weiss shows us argument and counter-argument, lures us with misleading tracks, surprises us by sudden pauses or by an unexpected turn of harmony.’

Weiss’ Lute Sonata No. 39 dates from 1731-35 and shows many of Weiss’ compositional traits: it is in the style galant and merges the da capo aria with the concerto form. The opening movement, entitled ‘Ouverture,’ is filled with imitative counterpoint and uses the entire three-and-a-half range of the 13-string lute.


The Japanese lutenist Yasunori Imamura studied at the Scuola Cantorum Basiliensis in Switzerland with Eugen Dombois and Hopkinson Smith. His solo recordings include the complete lute works by Bach. 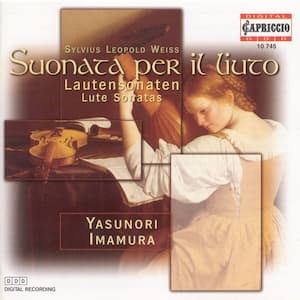