French composer Gabriel Fauré (1845-1924) had his musical talent recognized early and went on to become one of the most advanced and influential composers of his time. He held a number of church position as organist, and in 1871, he was appointed assistant organist at the Paris church of St. Sulpice where he quickly became part of the musical circle around his former teacher, Saint-Saëns. His friends included d’Indy, Lalo, Duparc and Chabrier, and with them, he formed the Société Nationale de Musique on 25 February 1871. After St. Sulpice, he went to the Madeleine church to deputize for Saint-Saëns and was appointed choirmaster after Saint-Saëns’ departure. His church jobs and his teaching mean that his time for composition was confined to the summer holidays. We know Fauré today for his piano work and his Requiem, reflecting his religious work.

Fauré met the American painter John Singer Sargent in France and Sargent became a life-long devotee of his music. When Sargent was in London, he promoted his music there, even organizing studio concerts that would include his music. From 1889 to 1898, Sargent made 4 portraits of Fauré, one in oil and the others sketches.

The painting of Fauré captures a charismatic and good-looking man assured of both his place and position. This picture was owned by Fauré and passed down through his son’s family to the current owner. 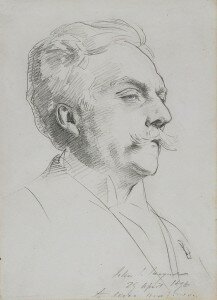 The three drawings of Fauré capture him in different moods: The 1896 drawing seems to capture a more reserved Fauré than did the painting. The hooded eyes and the tidied up facial hair show how much he’d grown in the intervening years.

The next drawing done in 1896 was given to the dedicatee of the image. Dated 29 April 1896 and inscribed by Sargent to “Mrs. Maddison.” The English composer, Adela Maddison, worked with her husband from 1894 to promote Fauré’s music in London, translating some of his works into English and studying composition with him. She was in Paris between 1898 and 1905 and is thought to have become his mistress. Fauré dedicated his Nocturne No. 7 to her in 1898. 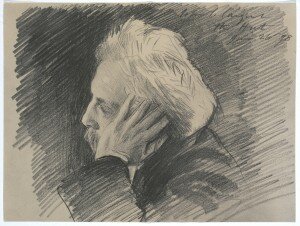 Fauré: Nocturne No. 7 in C-Sharp Minor, Op. 74 (Jean Martin, piano)
Two images from 1898 indicate Fauré’s increasing popularity outside France. Sargent’s two pencil sketches show us two different sides of the composer: one is a pensive image, drawn from the back.

The other is the dominant composer we’ve seen from Sargent’s first painting. The two pictures were drawn on the same day, 26 June 1898, on the occasion of Fauré’s trip to London. 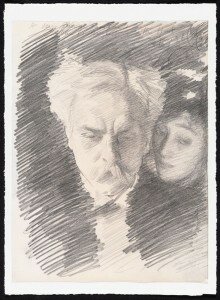 In June 1898, Gabriel Fauré came to London to conduct his score for Maurice Maeterlinck’s Pelléas et Mélisande. First performed in Paris in 1893, this Symbolist play tells the story of two doomed lovers. The English performance on 21 June 1898 included Mrs. Patrick Campbell (1865–1940) as Mélisande in the title role. Fauré has been commissioned to write the work by Campbell, after they were introduced by Leo Frank Schuster, a wealthy patron. Sargent made this sketch of Fauré and Campbell at a party held at Schuster’s country home, The Hut, following the opening of the play. Fauré’s strongly modeled head emerges from a shadowed background, conveyed in slashing strokes of charcoal with Campbell tucked in behind his shoulder, looking wistful. Sargent presented this drawing to Schuster as a gift and it remains in private hands.

Fauré: Pelléas et Mélisande, Op. 80 : VII. La Mort de Mélisande – Andante molto, quasi adagio (Stuttgart Radio Symphony Orchestra; Heinz Holliger, cond.)
Sargent was a painter with a rare talent for portraits. He was also a consummate musician, with the ability to play difficult music at sight, and, if he couldn’t play everything, was noted by his friends that “…when cornered by a surprise difficulty, he revealed his genuine talents for music by playing all that which was and is more essential.” One musician thought that had Sargent even chosen the path of music, he would have risen to “eminence in our art.”