Composers Inspiration
For Children and for Everyone: Fauré’s Dolly Suite
by Maureen Buja May 8th, 2018
Tags: Fauré 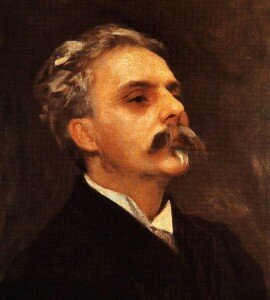 Gabriel Fauré didn’t like giving his works revealing names. He once said that he’d rather name every work ‘Piano Piece No. …’ than commit to a name. Commercialization in the person of his publisher defeated him and so we have works with titles that help us understand what he meant in a composition.

One work, however, that Fauré did give titles to were the six pieces that make up his Dolly suite. The pieces were written for the daughter of his mistress, Hélène Bardac (1892–1985), who was known to her family as Dolly. Fauré started working on the pieces in 1893, when Dolly was only 2. He completed the work in 1896, when she was 4. Through the pieces we can see Dolly’s own development, such as in the second piece. Mi-a-ou, which, although it looks like the sound of a cat, was actually Dolly’s attempts at saying her brother Raoul’s name. The work was originally for piano duet and was later orchestrated in 1906 by Henri Rabaud.

All works, however, despite being intended for a specific recipient, were not necessarily new. The first piece, a lullaby entitled Berceuse, had actually been written some 30 years earlier for another daughter of another friend. The original title had been La Chanson dans le jardin (The song in the garden). The work was presented for Dolly’s first birthday.

Fauré: Dolly Suite, Op. 56 (arr. H. Rabaud): I. Berceuse: Allegretto moderato (Seattle Symphony Orchestra; Ludovic Morlot, cond.)
Mi-a-ou, or, as it was originally titled, Messieu Aoul and then shortened to Miaou. Its final title, with hyphens, was given by Fauré’s publisher, Hamelle. It would seem that when the publisher didn’t understand a title, or felt that his customers would misconstrue it, he would change it. Its quick turns of line could be that of either a child or a cat.

Fauré: Dolly, Op. 56: II. Mi-a-ou (Gaby Casadesus – piano; Robert Casadesus – piano)
New Year’s day 1895 was celebrated by the third work, Le jardin de Dolly (Dolly’s Garden). This work, despite the weather of the season, takes us outdoors with its enchanting music of nature. A phrase from Fauré’s first violin sonata, written some 20 years earlier, appears in the work. Although Berceuse might be the best-known movement of the suite, it is this garden piece that many consider the brilliant jewel at the heart of the suite.

Fauré: Dolly, Op. 56: III. Le jardin de Dolly (Gaby Casadesus – piano; Robert Casadesus – piano)
The Kitty Valse, or, as it was originally entitled, the Ketty Waltz, is not about a cat (again), but about the family dog, Ketty. Fauré’s publisher Hamelle had a hand in the change of title. This work was a birthday present for Dolly in 1896.

Fauré: Dolly, Op. 56: IV. Kitty Valse (Gaby Casadesus – piano; Robert Casadesus – piano)
The fifth work, Tendresse, had originally been dedicated to Adela Maddison, the wife of a music publisher, who Fauré may have been having an affair with at this time, as well as with Dolly’s mother. This is the most modern of the pieces, lyrical but with chromaticism, and gives a solemn balance to the work as a whole.

Fauré: Dolly, Op. 56: V. Tendresse (Gaby Casadesus – piano; Robert Casadesus – piano)
The work closes with an unusual excursion: down south for a dance from Spain, very reminiscent of works such as España by Emmanuel Chabrier, a friend of Fauré’s. This evocative scene painting makes us realize that this entire suite, although ostensibly written for a five-year-old child, was also written for everyone.

Fauré: Dolly, Op. 56: VI. Le pas espagnol (Gaby Casadesus – piano; Robert Casadesus – piano)
In its orchestral version, the work is even closer to the great French/Spanish works of the time.

Fauré: Dolly Suite, Op. 56 (arr. H. Rabaud): VI. Le pas Espagnol: Allegro (Seattle Symphony Orchestra; Ludovic Morlot, cond.)
The late 19th century saw a fashion for children’s music for piano, either written for children or inspired by children, including Debussy’s Children’s Corner (1908) and Bartók’s For Children (1909). Fauré’s Dolly is a worthy addition to those works, yet like all those children’s works, speaks to the child in us.