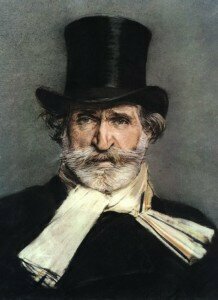 A tragic story of jealousy, vengeance and sacrifice, Rigoletto is one of Verdi’s most popular operas. In fact, when it premiered in Venice at La Fenice on 11 March 1851 to a full house, the aria “La donna è mobile” was so popular that people were heard singing it in the streets the next morning. Verdi immediately knew that he had a hit on his hands. 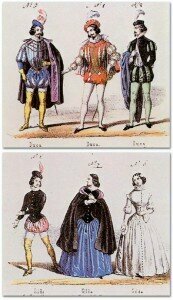 Premiere costumes for the Duke and Gilda

Prior to the first performance, Verdi had demanded complete secrecy from his première cast. The tenor was forbidden from even whistling the catchy “La donna è mobile” outside of rehearsals. Verdi had discovered the gripping story of lust and revenge in 1850. He wrote to his librettist Francesco Maria Piave “I have another subject that would be one of the greatest creations of modern theatre. The subject is grand, immense, and has a character who is one of the greatest creations that the theatre in any county or period could boast.” And Verdi also knew that he had written sensational music. “I conceived Rigoletto without arias,” he writes, “as an unbroken chain of duets because I was convinced that that was most appropriate.” 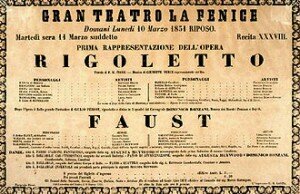 The story revolves around the lecherous Duke of Mantua, who is in the habit of seducing wives and daughters at his court. Meanwhile, his hunchbacked Jester, Rigoletto, adds insult to injury by ridiculing their husbands and fathers. When a joke goes too far, a furious father proclaims a curse on Rigoletto. The curse comes to life as the duke seduces Rigoletto’s young and innocent daughter Gilda, and Rigoletto plots his revenge with an attempt to assassinate him. However, Gilda has fallen in love with the Duke and sacrifices her life to save him from the assassin hired by her father. Verdi considered Rigoletto his “best opera,” and it was a huge box-office success. It initially ran for 13 performances, and it quickly became a staple of the standard operatic repertoire.