Opinion
Play It Again… and Again and Again
by Frances Wilson March 10th, 2019

In praise of street pianos

A piano asks to be played and is a wonderful reminder of the nature of play and the pleasure of making music, regardless of genre. Most people passing by a piano can’t help but strike a few notes, improvise a riff, or play a whole piece. A street piano invites us to pause, do something spontaneous, bring pleasure to others and enjoy ourselves. 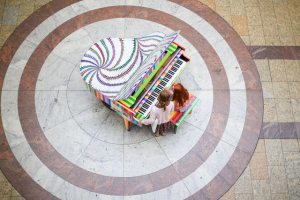 Street or public pianos are now quite commonplace, often located in railways stations or public spaces for anyone to play. The first public piano was in Sheffield, UK, in 2003, with a friendly “Play me” sign on it. It proved hugely popular and in 2008 the Play Me I’m Yours project, created by artist Luke Jerram, was first commissioned in Birmingham, UK, with 15 street pianos located across the city. Within just a few weeks it was estimated that over 140,000 people played or listened to music from the pianos. The project has since gone from strength to strength, with more than 1900 street pianos located in 70 cities worldwide.

Street pianos attract players of all ages and abilities – Sir Elton John and the Russian pianist Valentina Lisitsa have both played the street piano at London’s St Pancras Station, amongst countless others. Members of a piano club I’m connected with made a special club trip to play the street piano at St Pancras to perform exam pieces and other repertoire, treating the experience as an important performance opportunity.

For those of us of a very nervous performance disposition, these are GREAT. For attracting more people to music making rather than the commercialised electronic production and marketing the general public THINK is music, even better.
– David, advanced amateur pianist, London

For many people, street pianos offer a special kind of pleasure, an escape from the everyday, a chance share music with others, or simply to practise. Many people, including a number of professional pianists, highlight the usefulness of street pianos for practising while waiting for a train, especially if one doesn’t have access to an acoustic piano at home.

…street pianos are a great way to connect with people who may never have come to a concert before
– Daniel Roberts, concert pianist, Brazil 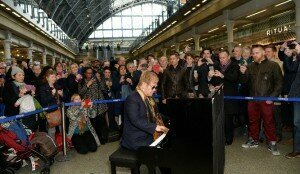 In London in 2011 the spirit of the street piano as a means of sharing music with others in a public space was invoked during a very special all-day concert organised by a friend of mine to celebrate and commemorate the extraordinary work of Sir Nicholas Winton, a British humanitarian, who organised the rescue of 669 mostly Jewish children, from Czechoslovakia on the eve of the Second World War, in an extraordinary operation later known as the Czech Kindertransport (“children’s transport”). The children he rescued arrived at Liverpool Street station. A grand piano was placed in the main concourse of the station and the day-long concert included performances by British pianists Anthony Hewitt and Viv McLean, and violinist Tamsin Waley-Cohen. As much a celebration of Winton’s remarkable work as the sharing of music, the event proved just how special the street, or public piano can be – because these instruments go right to the heart of making music as a social activity and remind us that music unites and connects people.