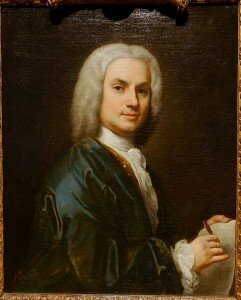 The Italian soprano castrato singer Carlo Borschi, better known simply as Farinelli, studied in Naples under the most famous teacher of singing of the day, Nicola Porpora. Porpora, a successful opera composer, had his student debut in his work Angelica as the character Tirsi in 1720.

As the 18th century progressed, Farinelli first became famous throughout Italy and then through Europe, starting with a visit to Vienna.

One writer, who heard him in Napes in 1725 and again in Milan and Parma in 1726 described his voice: 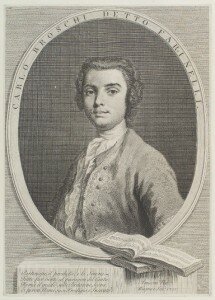 Farinelli had a penetrating, full, rich, bright and well-modulated soprano voice…. His intonation was pure, his trill beautiful, his breath control extraordinary and his throat very agile, so that he performed even the widest intervals quickly and with the greatest ease and certainty. Passage-work and all varieties of melismas were of no difficulty whatever for him. In the invention of free ornamentation in adagio he was very fertile (Marpurg, 1754).

By 1737 he was named chamber musician to the Spanish King. He had been hired by the Queen, Elisabetta Farnese, to sing to her husband King Philip V, who suffered from severe depression. It was her belief that Farinelli’s voice would help the king. Farinelli never held another public performance but sang nightly to the royal family. After the death of Philip V, Ferdinand VI, Philip’s son, prized Farinelli even more than his father. When Ferdinand VI was succeeded by his half-brother Charles III in 1759, Farinelli’s time at court was over and he retired to Bologna where he died in 1782. 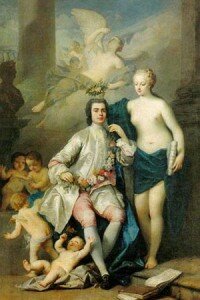 The Italian painter Jacopo Amigoni / Giacomo Amiconi made his name with languorous paintings of the gods at their leisure. Starting in 1717, he worked in Germany, Italy, and England, where he met Farinelli. Eventually, he came to the court of Ferdinand VI in Madrid where he painted a group scene that included Farinelli. Amigoni died in Madrid in 1752. 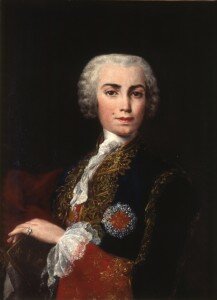 Amigoni painted Farinelli’s picture number of times, capturing the beauty of the royal favourite and his mileu. This 1735 engraving, based on a picture by Amigoni, captures the calm assurance of the singer. The original picture has not been found, but this engraving by Amigoni’s business partner, Giuseppe Wagner, shows us something of the original. It also preserves a little couplet below the image:

Naples brought him forth, and all the Sirens
Were unsurpassed by his superb singing.
Fame led him on to Britain’s stages
And his names were Prodigy and Enchantment.
Porpora: Polifemo: Aria: Alto Giove (Bejun Mehta, counter-tenor; Concerto Köln; Pablo Heras-Casado, cond.)

Another picture, in a much more metaphorical style, shows the seated Farinelli, surrounded by putti and being crowned by the muse Euterpe, the muse of music, shown holding music in her left hand while other music lies scattered on the floor. Behind Farinelli, an angel with two trumpets represents Fame and the whole image suggests the manner in which he took England by storm. 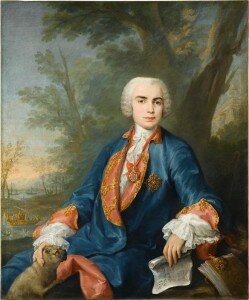 When Farinelli was made a Knight of the Order of Calatrava in 1750, it was time for yet another portrait by Amigoni.

Another painting of Farinelli wearing the Order of Calatrava also includes a piece of music, the first few measures of an aria from opera Zenobia by Gaetano Latilia, which had its premiere in Turin, Italy in 1742. 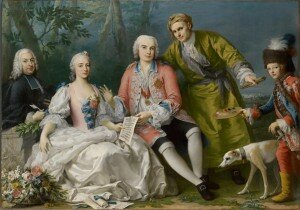 A group portrait from this same time period (1750-1752) by Amigoni shows Farinelli at the centre of an intimate circle of friends, including Teresa Castellini, the prima donna of the Madrid opera; the Abate Metastasio, Farinelli’s lifelong friend and the librettist for many of his most famous performances; and Amigoni himslef, who stands behind Farinelli.

It is said that the portrait was made because of Farinelli’s love for Cartellini, who was about to leave Madrid for Italy. It’s a portrait of friendship and of future loneliness.

Farinelli returned to Italy and, in Bologna, was a center of music life. The English music historian Charles Burney visited him, as did Mozart and the famous lover Casanova. He was buried in the mantle of the Order of Caltrava in Bologna in 1782. During his life, Farinelli was the greatest of the castrato singers, and was a legend both in his own life-time, continuing up to the 1994 movie about his life, Farinelli.