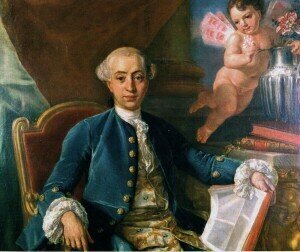 Popular culture has always been mesmerized by the exploits of the Venetian adventurer and author Giacomo Girolamo Casanova (1725-1798). Primarily remembered for his countless affairs with women and a handful of men, he was also a scam artist who made and lost fortunes. He founded state lotteries, fought duels, spent a significant amount of time behind bars, and wrote forty-two books and 3,600 pages of memoirs! “I begin by declaring to my reader,” he writes, “that, by everything good or bad that I have done throughout my life, I am sure that I have earned merit or incurred guilt, and that hence I must consider myself a free agent… Despite an excellent moral foundation, the inevitable fruit of the divine principles, which were rooted in my heart, I was all my life the victim of my senses; I have delighted in going astray and I have constantly lived in error, with no other consolation than that of knowing I have erred.” Casanova’s autobiography is widely regarded as one of the most authentic sources of the customs and norms of European social life during the 18th century. If that is indeed the case, it doesn’t paint a particularly pretty picture of musicians, and that includes Casanova who briefly worked as a violinist. 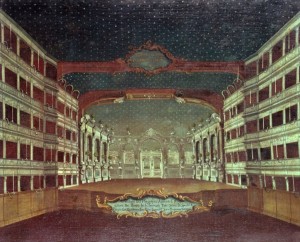 Interior of the San Samuele Theatre, Venice (oil on canvas)

Casanova hated music! Growing up in a boarding house under the care of Abbé Gozzi, he received violin lessons throughout his teenage years. During his years at University studying ecclesiastical law, Casanova developed a gambling addiction and his indebtedness quickly landed him in jail. His increasingly public sexual scandals eventually forced him to take up the life as a soldier, and he joined a Venetian regiment at Corfu. Once he returned to Venice, Casanova became a professional gambler, but loosing all his money he turned towards a career as a violinist at the San Samuele Theater. In fact, it took a good deal of effort to convince the nobleman Michele Grimani to secure him a job as a musician. Casanova writes, “a menial journeyman of a sublime art in which, if he who excels is admired, the mediocrity is rightly despised. My profession was not a noble one, but I did not care. Calling everything prejudice, I soon acquired all the habits of my degraded fellow musicians.” 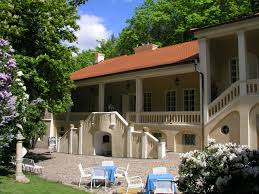 Casanova, it turns out, could not have cared less about music. To his way of thinking, to work as a humble fiddler was the ultimate humiliation for a brilliant university graduate! He was an angry young man, and together with his musician colleagues he frequented Venice’s least salubrious taverns after evening performances. Roaming drunkenly around the city, they committed crimes of petty vandalism and played malicious practical jokes on the population. The musician gang set gondolas loose on the canals, rang alarm bells in the church towers and broke into houses in the early hours of the morning. “They snatched whores away from their clients in the brothels, made them submit to brutal sex acts and then left without paying.” These crimes and misdeed culminated in a premeditated gang rape during the 1746 carnival in Venice. They abducted the pretty wife of a weaver and took her to a private upstairs room. Once they had plied her with wine, they took turns raping her. When Casanova wrote about the affair in later years, he was still convinced that the woman had enjoyed “her happy fate.” Her husband disagreed, and took the matter to the police. City authorities offered a large reward for anyone who denounced the rapists, but since the ringleader was a nobleman, no one did.

Casanova escaped the humiliating existence of a musician by saving the life of a Venetian nobleman. Entering into the Senator’s service, Casanova worked as a legal assistant and led the life of a nobleman, “dressing magnificently and, as was natural to him, spending most of his time gambling and engaging in amorous pursuits.” Although his days as a working musician were behind him, Casanova might have had another indirect brush with music. As a close friend of Lorenzo da Ponte, it has been conjectured that Casanova had a hand in touching up the libretto of “Don Giovanni” by Lorenzo da Ponte, eventually set to music by Wolfgang Amadeus Mozart. Casanova lived in Prague, and one of the fancy tales surrounding him suggests that he actually met Mozart in 1787. That meeting might have taken place at a villa called “Betranka,” located on the outskirts of Prague. The rural retreat of local arts patrons Josefina and Fratišek Dušek, Casanova and da Ponte regularly attended concerts at that location and mingled with other celebrities. And we do know for certain that Mozart moved into “Betranka” in October 1787, with da Ponte’s unfinished libretto in hand.