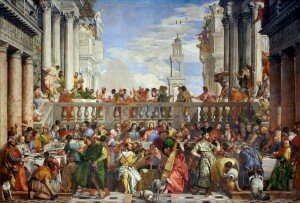 In his monumental painting, The Wedding at Cana (1563), the Italian painter Paolo Veronese (1528-1588) portrayed the biblical story of the marriage at Cana (John 2:1-11) where Jesus saves the celebration by his miraculous conversion of water into wine. The painting, 6.77 m × 9.94 m (22.2 feet × 32.5 feet), was commissioned by a Venetian order of Benedictine monks for their new refectory on the island of San Giorgio Maggiore. 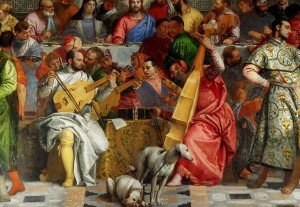 Ortiz: Ricercare (Ensemble Suonatori)
When the painting was in place, it made the refectory seem an extension of the painting.

At the centre of the painting and the centre of the festivities is a small ensemble. On the table, held up with the aid of an hourglass is a book of music in a dark cover. The players on the left and right are looking into their own part-books. 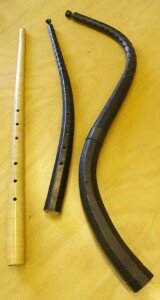 Art historians have been arguing about the identity of the players since the 1670s. A new study in 2017 suggests that the model that Veronese used for the viola da gambist was keyed to the arrival in Venice of the Spanish master of the instrument, Diego Ortiz, chapel master at the Court of Naples. All historians agree that the players are the main painters in Venice and one clue the authors found to help with their identifications is that all the painters have gold rings on their fingers. Conversely, not all the players have gold rings (although it was certainly in the artist’s power to paint them). Over time, the historians generally agreed on these identifications: Veronese himself in the white tunic, then Jacopo Bassano in a hat (wind instrument), Tintoretto with the blue and red coat and Titian in red. This leaves the instrumentalist behind Veronese unidentified.

Arcadelt (arr. Ortiz): O felic’occhi miei (James Tyler, tenor viol; Anthony Rooley, lute)
First let’s identify the instruments: all of them are from the viola family – from left to right: tenor, melodic bass (tuned an octave above the bass), soprano, and bass viola. The wind instrument is a cornetto – a wood instrument played with a trumpet-like mouthpiece. 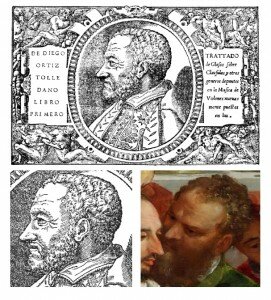 Busnois: Fortuna desperate (arr. for cornetto and viol ensemble) (Sherw Doron in, cornetto; Alberto Rasi, viola da gamba; Paolo Biordi, viola da gamba)
Through history, the identity of the man with curly hair playing the melodic bass viol hasn’t been identified. The authors of the 2017 article however think that he is Diego Ortiz himself, and showed this illustration to support their idea:

The players, then, from left to right are: Veronese (tenor viola), Ortiz (melodic bass viola), Jacopo Bassano (cornetto), Tintoretto (soprano viola), and Titian (bass viola). The position of Ortiz is such that he looks as though he’s whispering in Veronese’s ear. His music book just barely appears behind Veronese’s head.

Ortiz: Passamezzo moderno (James Tyler, tenor viol; Anthony Rooley, lute)
In addition to their artistic skills, the painters were also associated with music: Veronese designed 2 organ complexes for two different churches and Tintoretto was a competent musician. Titian did a painting of the instrument maker Alessandro Trasuntino and was paid with an organ. The painters shown as instrumentalists are more than a metaphor. It was a way of putting them at the centre of the action with a reason to be there. Being joined by the greatest performer on the viol, in their own consort of viols, was a tribute to all concerned.