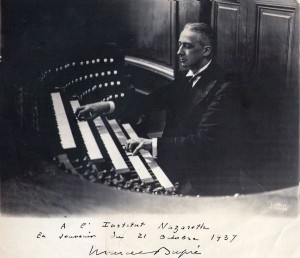 Inspiration can strike anyone, anywhere, anytime. And while some artists find inspiration in nature, psychology, religion or political convictions, there is a source that’s much closer to home; their own children! It goes without saying that all parents want what’s best for their kids, and that’s certainly true for the children of famous composers as well. J.S. Bach considered his son Wilhelm Friedemann a brilliant musical talent. To support the growth of his son as a performer and composer, Bach compiled a number of pieces for keyboard instrument entitled “Notebook for Wilhelm Friedemann Bach.” Debussy adored his daughter Claude-Emma, affectionately nicknamed “Chouchou,” composing the famed “Children’s Corner” for her. However, it was not music that Debussy wrote for his daughter to play immediately. Eventually “Chouchou” did learn to play the piano, and she told Marguerite Long, “I don’t know what to do. Daddy wants me to play the piano; but he forbids me to make a noise.” On a number of occasions, both the parent and the offspring are brilliant musicians, as was the case with Marcel Dupré and his daughter Marguerite Tollet-Dupré. In fact, the daughter became her father’s most important music muse. 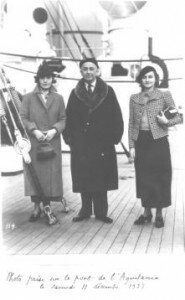 Marguerite was an only child born out of wedlock in 1909. Her parents Marcel and Jeanne Dupré immediately recognized the musical talents of their daughter, and she was present at the age of eleven, at the Albert Hall in London for her father’s debut in England in 1920. Her parents quickly searched for a suitable teacher, and among several Russian émigré musicians who had sought refuge in Paris, Nikolai Medtner came to live in Meudon. He was a frequent visitor to the Dupré home, and would bring along his good friends Alexander Glazunov and Sergei Rachmaninoff. Dupré took an immediate interest in Medtner, and invited him to become the piano teacher of his beloved daughter. When Medtner moved to London, Marguerite Dupré commuted from Paris to continue her studies with him. Her talents as a pianist were beyond doubt, but she never won any prizes at the Paris Conservatory. With her father an active and famous faculty member at that institution, it was unjustly considered politically incorrect.

In 1928 Marguerite played for the famous pianist Francis Planté, who told her “When you are a grandmother you will be able to tell your grandchildren that you played the piano to a very old gentleman who, at the age of seven, played before Haydn’s student, the Chevalier Sigismund von Neukomm.” Marcel always wrote and spoke of his daughter with touching tenderness, and although she had a busy solo career, father and daughter would share the stage on a number of occasions. In fact, Marguerite made her American debut on 29 September 1937 in a composition for piano and organ, written by her father. In all, Marcel Dupré composed three works for joint performances with his daughter. 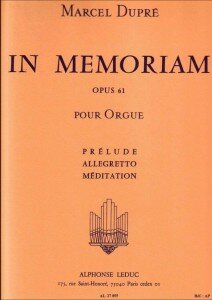 Marguerite died after a long illness on 26 October 1963. Her father was overcome with intense grief and composed the largest of his late works, In Memoriam, Op. 61. Described as “a votive stone offered in memory of his child,” the composer remembers aspects of his daughter’s life, ranging from childhood to her death. It is not a requiem, but a collection of memories of “our dear daughter, dead before her time.” A family friend remembers, “A few years ago, the day after a cruel bereavement which broke his heart as a father, he managed to overcome his immense sorrow he played his organ. I expected to find him worn out, reluctant to play perhaps, but I was quite wrong. A parishioner who had no idea of the drama said to me that morning, “What got into Monsieur Dupré today? Did you notice, especially during communion? He surpassed himself.”