Misia Sert’s friendship and support for Diaghilev and Stravinsky continued unabated, and her financial support for both artists, particularly during the years of the Russian Revolution, saved both from financial ruin. Her role in Diaghilev’s production of the ballet Parade was instrumental. Already in 1914, she had arranged for Eric Satie to play his music for Diaghilev. Although unknown to the general public, Satie’s talent was recognized by her as well as by Debussy, Ravel, and Stravinsky — all of whom admired the hypnotic purity and the anti-Wagnerian aspect of Satie’s music. In 1916, Diaghilev, responding to Misia’s enthusiasm, finally took up the idea of a Satie ballet. The poet and playwright, Jean Cocteau, who had met Satie at Misia’s apartment, was to write the scenario for the ballet. On Cocteau’s initiative, Pablo Picasso was chosen to design the sets and costumes – his first work for the theater. 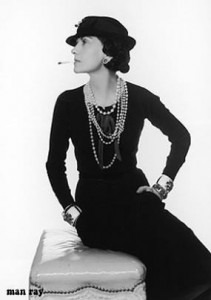 Jean Cocteau wrote “Our wish is that the public consider Parade as a work that conceals poetry beneath the coarse outer skin of slapstick… Parade brings together Erik Satie’s first orchestral score, Pablo Picasso’s first stage décor, Massine’s first Cubist choreography, and a poet’s first attempt to express himself without words” (Gold, A. and Fizdale, R. Misia, 1980, p. 183). It turned out to be a milestone in the history of the relationship between the various art forms. In the program notes for Parade — Cocteau’s ‘ballet réaliste’ — the poet Guillaume Apollinaire invented a new word “sur-réalisme” (super-realism), to describe the “magical fusion of décor, scenario, music and dance” (ibid p. 183) – a poetic reality more valid than reality itself. This in turn would inspire other contemporary poets such as Reverdy, Jacob, Ernst, Aragon and Breton, painters such as Picasso, Braque, Derain and Leger and musicians such as Satie, to further explore these surrealist concepts in their works.

Misia also recognized and supported the talents of Poulenc, who was among the younger group of composers called ‘Les Six’ — Milhaud, Auric, Honegger, Milhaud and Tailleferre — all of whom became part of Misia’s circle of friends. Poulenc was commissioned to write the music for the ballet ‘Les Biches’ with the décor and costumes created by Marie Laurencin, another close friend of Misia’s.

Throughout her life, Misia remained a loyal friend to Picasso – he even asked her to be witness at his wedding to the Russian dancer, Olga Kokhlova, and later to be godmother to his son Paolo. Misia always appreciated Picasso’s genius, and considered one of his small paintings in her possession far more precious than all of her husband’s work. 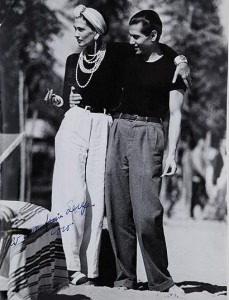 During the production of Parade Misia was introduced Coco Chanel, who would become a lifelong friend. Misia introduced Chanel into her milieu, the salons of the ‘haute bourgeoisie’, where so-called ‘tradesmen’ were generally not admitted. From a working-class background, and having grown up in an orphanage, Chanel had worked as singer, entertainer, and milliner by the time Misia met her. But from 1916 onward, Chanel transformed herself from the little milliner to the leader of fashion. She revolutionized the fashion world introducing ‘jersey’ as a new material. It draped well, was inexpensive, practical and suited to her simple designs, which were often inspired by men’s wear. Her uncluttered style liberated women from corsets and reflected their independence and more active lifestyle. 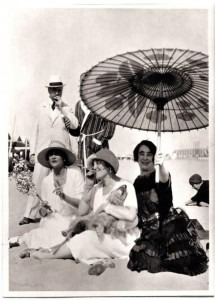 With great success worldwide, Chanel relocated her couture salon to 31, Rue Cambon, Paris (where it is still today), followed by others in Deauville and Biarritz, the fashionable seashore vacation towns of the Parisian high society. Chanel herself represented the modern woman — slim, fit, with short cropped hair, and financially independent. On Misia’s suggestion, she invented the Eau de Chanel, which later became the famous Chanel No. 5. As her close friend over many years, Chanel became a constant part of Misia’s milieu of the musical, literary and theatrical avant-garde. Chanel was commissioned to design the costumes for Cocteau’s production of Antigone and the ballet ‘Le Train Bleu’, with music by Milhaud, and premiered by Diaghilev in 1924. Her form fitting bathing suits, designed for the ballet, inspired Picasso’s 1918 painting ‘Women Bathing’.

Throughout her long life, Misia remained the muse and important friend to many musicians, writers and painters — bridging generations of artists — which, hopefully, my three articles have brought back into focus.