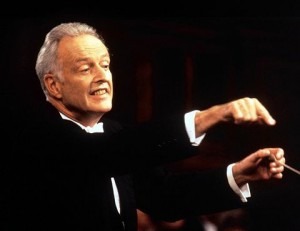 They are among the most admired and revered, yet simultaneously most feared figures in classical music. And yes, you guessed correctly, I am talking about orchestra conductors! When we think of all the hugely talented and revolutionary conductors of the 20th century, it’s almost impossible to come up with an appropriate starting point. There is always the fear that you leave out somebody who desperately needs, or wants to be on such a list. Yet for me personally, the only possible starting point has to be Arturo Toscanini. Charismatic to the point of ruthlessness, he kicked Mahler out of New York City and in the process entrenched an essentially modern performing style—faster tempos, less rubato, and away from musically milking individual phrases to instead fixate on the structural architecture of the music. His ear for orchestral detail and color combined with an almost overbearing sense of perfection and intensity, and one glance of those piercing eyes could almost certainly melt a rather large iceberg!

If intensity was one of the great hallmarks of Toscanini, Wilhelm Furtwängler has been described in somewhat different terms. Mind you, a furiously jealous Toscanini also kicked him out of New York City! “Control and balance are prominent characteristics of his conducting; his interpretations, though full of vitality, are not impulsive and his personal manner at the conductor’s desk is usually restrained.” Furtwängler has gained some negative notoriety for refusing to leave the insanity of Nazi Germany. Yet he believed in two Germanies: A permanent cultural Germany, and an irrelevant political one. Somewhat naively, he believed that music was a force for moral good, and his anguish translated into a musical vision of unprecedented insight and power. For Furtwängler, symphonic music was a creation of nature that could only be realized subjectively into sound. His interpretations are less rhythmically strict, more bass-oriented and more conscious of minute tempo changes. Instead of being a stickler for perfection in details, Furtwängler was primarily looking for the spiritual dimension in art.
Mozart: Overture to Don Giovanni, Wilhelm Furtwängler

Any considerations of ginormous orchestral conductors in the 20th century, no pun intended, just wouldn’t be right without Lenny Bernstein. He had a unique way of communicating with the audience and for getting his artistic vision across to his colleagues. Bernstein had an utterly contagious attitude about music, with one veteran musician suggesting, “when he gets up on the podium, he makes me remember why I wanted to become a musician.” His frequently extreme movement on the podium—and those incredibly expressive hands—paired with an unusual approach to rhythm and tempo. Lenny was instantaneously captivating and able to channel the deepest emotions. As a critic suggested, “Bernstein could take you places mere mortals cannot.” However, Bernstein possibly exerted his greatest influence on the general public. Through television shows and endless self-promotion, Bernstein popularized the classics in a way no previous musician had ever done.
Gustav Mahler: Symphony No. 1, Leonard Bernstein

With three of the obvious conducting giants out of the way, it now gets a bit tricky! There are just so many exceptional and wonderfully creative conductors that would easily be part of anybody’s Top 10. After lots of listening, watching and reading I have finally come to the conclusion that I would happily include Sir Colin Davis in this list of genius conductors. Armed with an extraordinarily broad view of music and art—and let’s not forget his naughty sense of humor—Davis was completely at peace with himself. And it was that acute self-awareness, that confidence and that humility that effortlessly informed both his personal and his professional life. He took the job as principal conductor of the London Symphony Orchestra under the conditions that he be rendered powerless. He gained power by giving it up, and this unconventional approach produced performances of electrifying intensity. He once remarked, “It took me a long time to discover that power and money are a total disaster, and that music is infinitely more interesting than either.” I can’t argue with that!
Hector Berlioz: Requiem, Sir Colin Davis

What do you get when you ask a selection of 100 of today’s finest maestros, including Sir Colin Davis, Gustavo Dudamel, Valery Gergiev, Mariss Jansons and Susanna Mälkki to come up with the greatest conductor of all time? For many music lovers stuck in swarm intelligence mode, the somewhat surprising answer was Carlos Kleiber! However you turn it, Kleiber was one of the most eccentric, exciting and unique conductors of all times. An die hard perfectionist, “he brought an incredible energy to music, and his vision was remarkable, he knew what he wanted, and his attention to detail was truly inspiring.” How obsessed was Kleiber with perfection in music, you rightfully ask? Well, it took 34 rehearsals in preparation for his first performance of Berg’s Wozzeck in Munich. Fair enough, for being crowned the greatest conductor of all times, Kleiber’s discography is relatively small. Yet, “his incredible attention to detail, sheer enthusiasm for music, and astonishingly accomplished level of performance could never be doubted.” In the real path to genius greatness, perhaps less is more after all!
Johann Strauss: “Overture,” Fledermaus, Carlos Klaiber