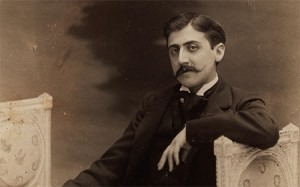 As Madame Alfred Edwards, Misia was showered with jewels by her husband, and lived in opulent surroundings served by butlers and footmen; at heart still a bohemian, she considered her new situation a ‘golden cage’. She was flattered by her new husband’s attention and money, but she was not really in love with him. Marcel Proust, her close friend, very much sensed her conflict. In his epic work ‘A la Recherche du Temps Perdu/In Search of Lost Time’, Misia becomes the model for the Russian Princess Yourbeletieff, as dazzling and beguiling as the Ballets Russes, which was later supported by Misia. However, Misia also serves as the model for Proust’s Madame Verdurin, the somewhat domineering arriviste, who uses her cunning instincts to move to a unique position in society. 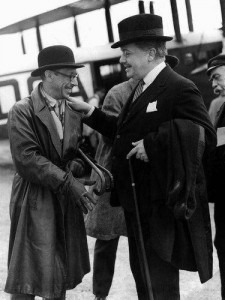 Misia’s soirées were the talk of Paris. Enrico Caruso would perform privately for her, Maurice Ravel would become a close personal friend, and many of the up-and-coming composers, such as Satie, Milhaud, Poulenc and Stravinsky could be found seeking her company and friendship. In fact, when Ravel, trying to win the Prix de Rome since 1901, was rejected again in 1905 by the very conservative jury of the music conservatory, Misia took up his cause in newspaper articles. Her campaign succeeded with the conservatory’s director resigning and Gabriel Fauré, her close friend, replacing him. Fauré would now further the careers of the younger generation, such as Debussy and Ravel. 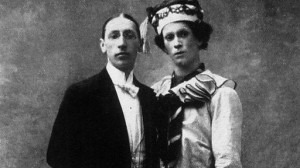 As Ravel was not allowed to re-apply for the Prix, as consolation Misia invited him on a lengthy cruise through Northern France, the Low Countries and the Rhine. In one of his letters, Ravel writes: “This is nothing like the Rhine as I had imagined it, tragic and legendary. There are no nixies, gnomes, or Valkyries… no Hugo, Wagner or Gustave Doré”. But he was impressed with an industrial town, where he witnessed factories as “…castles of flowing metals, these fiery cathedrals, the wonderful symphony… of whistles, of frightful hammer blows… a red, gloomy and burning sky…. a thunder storm breaking out… How musical this all is! I have the firm intention of putting it to use” (Gold, A. and Fizdale, R., Misia, 1980, ibid, p. 102). Ravel dedicated his song Le Cygne/The Swan and his Introduction and Allegro for Harp, String Quartet, Flute and Clarinet to ‘Madame Alfred Edwards, née Godebska’. Misia was also one of the first to recognize the genius of Claude Debussy. She had attended every performance of Debussy’s Pélleas and Mélisande in Paris – always moved to tears, proclaiming it a work of genius! 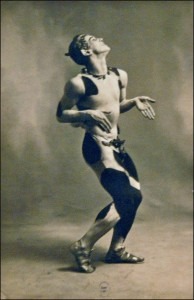 Njinsky in the Afternoon of a Faun

Ravel: Introduction and Allegro for Harp, String Quartet, Flute and Clarinet
By 1909, the Misia’s marriage to Edwards had run its course — deceived by his many infidelities, the marriage was dissolved. As consolation, Misia took up with the very wealthy Spanish painter, José-Maria Sert, first as his mistress and later, in 1920, his wife. 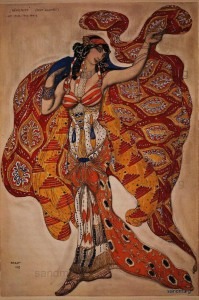 In 1909, Sert and Misia saw Serge Diaghilev’s production of Mussorsky’s Boris Godunov, with the great singer Chaliapin in the title role. Sert had met Diaghilev earlier at an exhibition of Russian paintings; he introduced Misia, who raved to Diaghilev about the music, the performance and the décor with an enthusiasm and understanding that left Diaghilev speechless. He had rarely received such compliments — it would establish their friendship, which would last until his death.

At the conclusion of his first Saison Russe in Paris, Diaghilev left for Russia, deeply indebted. His attempts to organize a return to Paris with the Ballets Russes only became successful with Misia’s help and financing. The succession of Russian ballets, the likes of which Paris had never seen, began in 1910. The technical perfection by beautiful dancers, such as Nijinsky, Karsavina and Pavlova, responding to new music, with opulent costumes and designs by Bakst, were a revelation for the Parisian high society. The ambassadors from America, Russia and Spain, the Vanderbilts, Rothschilds, and Gulbenkians, musicians and writers including Ravel, Proust, Gide, and Claudel – all attended and raved about the performances. Proust was heard to comment on Bakst’s Schéhérazade, “I never saw anything so beautiful”.

Misia introduced Diaghilev to Ravel, Debussy and Cocteau which resulted in the production of Ravel’s Daphnis and Chloë, Cocteau’s Blue Train and Debussy’s Prelude to the Afternoon of a Faun. Mallarmé’s program notes explain:

Most Parisians, but not Misia, found Nijinsky’s sensual interpretation as a faun shocking; however Auguste Rodin defended Nijinsky and Diaghilev and wrote:

“Form and meaning are indissolubly wedded in [Nijinsky’s] body… He is the ideal model, whom one longs to draw and sculpt. Nothing could be more striking than the impulse with which, at the climax, he lies face down on the scented veil, kissing and embracing it with passionate abandon. I wish that such a noble endeavor could be understood as a whole; and that … all our artists might come for inspiration and to communicate with beauty” (ibid, p. 144).

In next month’s article, I will continue to explore Misia’s influence on Picasso and Satie, and her close friendship with Coco Chanel and Igor Stravinsky.

Prelude to the Afternoon of a Faun – Claude Debussy