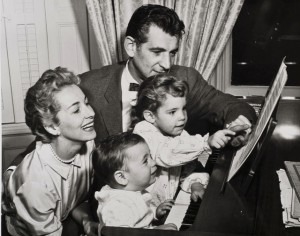 Felicia Montealegre was a stunningly beautiful Chilean stage and television actress making her living in New York. Leonard Bernstein was the wonder boy of the American classical music scene, who had made his spectacular conducting debut with the New York Philharmonic. They met at a party hosted by pianist Claudio Arrau, with whom Montealegre had studied. They were engaged a few months later, but the engagement was broken off after less than a year. The reason for the break-up of the relationship was not a secret, as Bernstein’s homosexual proclivities were undisputed and well documented. During his Harvard years, Bernstein had affairs with famed conductor Dimitri Mitropoulos and the aspiring composer Aaron Copland. And during his visit to Israel in 1948, he fell in love with the young soldier Azariah Rapoport. Bernstein writes, “I can’t quite believe that I should have found all the things I’ve wanted rolled into one. It’s a hell of an experience – nerve-racking and guts tearing and wonderful. It’s changed everything.”

Felicia was fully aware of Leonard’s sexual preferences, but she nevertheless continued to pursue him over the next three years. And Bernstein was worried that his homosexual activities would prevent him from landing a major conducting appointment. The couple married in September 1951 with the clear understanding that as long as Lenny did not embarrass Felicia publically, he was free to pursue his homosexual affairs. Despite this obvious marriage of convenience, there was a good deal of love between them. Soon after their wedding, Felicia openly writes to her husband, “If I seemed sad as you drove away today it was not because I felt in any way deserted but because I was left alone to face myself and this whole bloody mess which is our “connubial” life. I’ve done a lot of thinking and have decided that it’s not such a mess after all. First: we are not committed to a life sentence—nothing is really irrevocable, not even marriage (though I used to think so). Second: you are a homosexual and may never change—you don’t admit to the possibility of a double life, but if your peace of mind, your health, your whole nervous system depends on a certain sexual pattern what can you do? Third: I am willing to accept you as you are, without being a martyr or sacrificing myself on the L.B. altar. (I happen to love you very much—this may be a disease and if it is what better cure?) Let’s try and see what happens if you are free to do as you like, but without guilt and confession, please! The feelings you have for me will be clearer and easier to express—our marriage is not based on passion but on tenderness and mutual respect.”

The couple had three children, which led to the assumption that Bernstein was bisexual. However, according to his collaborators in West Side Story, Bernstein was simply “a gay man who got married. He wasn’t conflicted about his sexual orientation at all. He was just gay.” As was customary at that time, Bernstein appeared a devoted husband and father in the public eye, while carrying on a promiscuous homosexual life behind the scenes. It might have been a customary to hide behind a public facade, but Bernstein certainly felt that his homosexuality was a curse. He even underwent psychoanalysis from a specialist “curing homosexual men of their inversion.” In the end, the only cure was to publicly acknowledge his homosexuality, while taking out his frustrations on his wife. Apparently, Bernstein was having sex with a twenty-year old boy in the hallway while his wife was sitting in the living room. And when he met the young Tom Cothran in 1973, he allowed his wife to catch them in bed together. By 1976, Bernstein had left his wife for his latest male lover. The very next year, Felicia was diagnosed with lung cancer and Bernstein cared for her until her death in 1978. After Felicia’s death, Bernstein gave free reign to his addiction to alcohol and drugs, and engaged in openly crude homosexual activities. Yet, he always felt guilt over how his double life had adversely affected her. He eventually gave voice to his anguish in his 1983 opera A Quiet Place, sequel to his 1951 Trouble in Tahiti. As a close family friend once remarked, “Leonard required man sexually and women emotionally.”