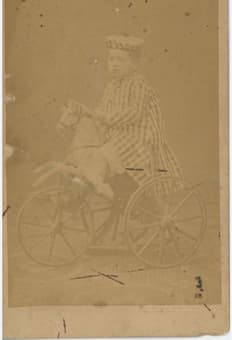 The birth of Gustav Mahler, the second of fourteen children born to Bernhard Mahler and Marie Mahler née Herrmann, was announced on 7 July 1860 in Kalischt, a small settlement on the border of Moravia. His parents were members of the increasingly assimilated Jewish petite bourgeoisie, and Bernhard was an aspiring tavern proprietor and distiller, while his wife Marie was the daughter of a soap maker. Gustav was circumcised on 14 July, and his birth registered by the Israelite Community at Unterkralowitz. Within a couple of months of Gustav’s birth, Bernhard moved his family across the Bohemian border into Moravia, joining a flourishing German-speaking Jewish community at Iglau (Jihlava). 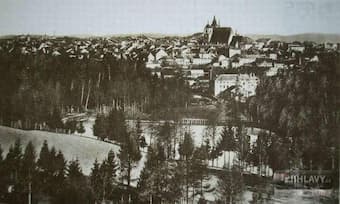 Gustav’s father established a distillery and tavern business, and the family secured lodgings right above the pub. Young Gustav was exposed to an infinite variety of music from all periods of history and every corner of the Austrian Empire. Iglau was home to an amateur orchestra, a professional theatre, an opera, and the church of St. Jakob, each richly contributing to the musical life of the community. In addition, Gustav experienced a wide range of music from local and extended folk traditions, including characteristic dances and songs of Jewish, Moravian, Czech, Austrian, German and Bohemian origins. 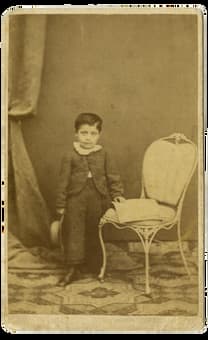 Iglau was also a major staging point for the Austrian army, and colourful military bands regularly participated in local festivals and engaged in concert activities. Apparently, Gustav was an enthusiastic observer at band concerts and parades, and family servants and friends taught him songs of various kinds. The memories of these musical impressions—alongside the stunning natural beauty of the Moravian countryside—would haunt Mahler for the rest of his life and dynamically reverberate in his compositions. The first known photograph of Mahler was taken at the age of 5 or 6. The boy is holding a piece of music, possibly one of his first compositions. Apparently, Mahler was terrified and refused to be photographed. “He was convinced that he would be whisked into the camera by the photographer’s magic spell and forever stuck to a sheet of cardboard. Only after he watched in awe as the photographer had his own picture taken and survived the experience was the youngster finally persuaded to pose.” 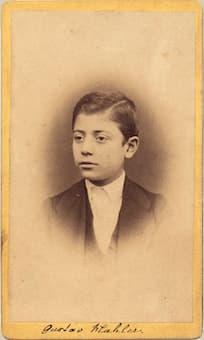 In keeping with the equating of social status with German culture typical of the period, “Bernhard Mahler collected a small library and bought a piano, on which his son rapidly acquired sufficient expertise to be presented as a local Wunderkind by the age of ten.” Heinrich Fischer, the musical director of St Jakob gave Mahler his first harmony lessons. While Mahler was deeply involved with making and exploring music, his academic work suffered. His teachers at the Jihlava Gymnasium described him as “absent-minded and unreliable in academic work.” In 1871, his father sent him to the New Town Gymnasium in Prague to improve his son’s mediocre school results, but the experience proved unhappy and he returned to Iglau. 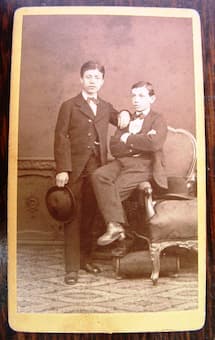 Mahler and his nephew Gustav Frank

On the occasion of the marriage between Archduchess Gisele and Prince Leopold in 1873, Mahler featured in a celebratory concert. His performance of Thalberg’s Fantasy on Bellini’s Norma elicited rave reviews and dazzled the audience. When his younger brother Ernst died of an inflammation of the heart muscle caused by a virus in 1875, Mahler sought to express his feelings in music. With the help of a friend, Josef Steiner, he started to draft an opera titled “Duke Ernest of Swabia” as a memorial. Sadly, neither the music nor the libretto of this work has survived. 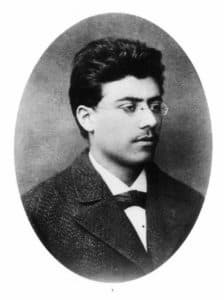 Bernhard Mahler was supportive of his son’s musical ambitions and agreed to send Gustav for an audition with the famous pianist Julius Epstein in Vienna. He was accepted as a student at the conservatory at the beginning of the academic year 1875/6. Mahler excelled in his piano studies with Epstein and won prizes at the end of each of his first two years. In his final years he turned to composition as his primary subject, studying composition and harmony with Robert Fuchs and Franz Krenn. A scholar writes, “Mahler’s formal musical training took place in the Vienna of Brahms and Hanslick, and he became a prominent member of a student generation newly inspired by Wagner.” He made friends with Hugo Wolf, Hans Rott, Rudolf Krzyzanowski and Anton Krisper, and thus became part of a circle of supporters of modernist musical tendencies. This brought Mahler in direct conflict with many of his teachers at the conservatory, “including its anti-Semitic director Joseph Hellmesberger.” For the most part, Mahler’s student compositions have not survived. He abandoned a number of works when he became dissatisfied with them. We know that he destroyed a “symphonic movement prepared for an end-of-term competition, after its scornful rejection by Hellmesberger on the grounds of copying errors,” a composition since reconstructed. At that time Mahler claimed to have written hundreds of songs, several theatrical works and various chamber music compositions, however only a single movement for a Piano Quartet in A minor has survived.