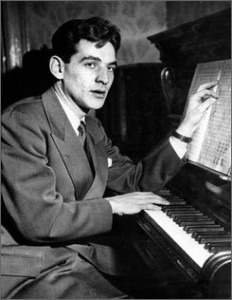 Leonard Bernstein undoubtedly was one of the most supremely talented interpretive musicians of the 20th century. Yet his compositional talents, as Mstislav Rostropovich has argued, “are simply not on par with his abilities as an interpreter.” Leon Botstein, President of Bard College and principal conductor of the American Symphony Orchestra damningly wrote, “Bernstein’s serious music, at its best, is reminiscent of an exuberant adolescent who… uses impressive mannerisms, clichés, and gestures to pour out his heart.” Bernstein meanwhile claimed, “I have always been writing the same piece, as all composers do. But each time it is a new attempt in other terms to write this piece, to have the piece achieve new dimensions, or even acquire a new vocabulary. The work I have been writing all my life is about the struggle that is born of our century, a crisis of faith.”

Leonard Bernstein: Symphony No. 1, “Jeremiah”
Bernstein’s first symphony was conceived as a lamentation for soprano and orchestra using Hebrew text from the book of Jeremiah. Once the lamentation had been completed, Bernstein prefaced the finale with two purely instrumental movements. Embracing Jewish themes in the aftermath of Nazi atrocities, Bernstein crafted an expressive blend of drama and brooding intensity that is simultaneously modern yet deeply tonal. Despite the intensity and seriousness of expression, the composer once suggested, “if you stripped down any of my serious compositions, you would still find a theatrical core.” Trouble in Tahiti, tracing an empty and meaningless day in the lives of a bored upper-middle class couple, is a scathing critique of contemporary American society. Although the lyrics are rather pedestrian, Bernstein’s music already displays all the styles for which he is most recognized. Bernstein tellingly wrote Trouble in Tahiti, an essentially savage attack on the institution of marriage on his honeymoon!

Leonard Bernstein: Trouble in Tahiti
In 1954, Bernstein wrote his only original film score for On the Waterfront. Directed by Elia Kazan and featuring Marlon Brando and Eva Marie Saint, the drama details union violence, corruption, extortion, and racketeering on the waterfronts of Hoboken, New Jersey. The film was showered with awards, although Bernstein’s score was not honored, and has since been ranked as the eight-greatest American movie of all time. Bernstein’s score evokes rather than describes, and the composer was frustrated that his soundtrack was often covered by dialogue. Tellingly, he quickly arranged the score into a symphonic suite.

Leonard Bernstein: On the Waterfront, “Suite”
Bernstein’s 1956 collaboration with the dramatist and screenwriter Lillian Hellman produced the operetta Candide. Based on Voltaire’s satirical novella of 1759, Candide was essentially unsuitable for theatrical treatment, and it showed. Writing in the New York Herald Tribune, Walter Kerr termed Candide “a really spectacular disaster.” It opened on Broadway on 1 December 1956 and closed after 73 performances. The work nevertheless boasts an amazing variety of music, ranging from Viennese waltzes to Lutheran chorales and Mozartean ensemble finales.

Leonard Bernstein: Candide
Bernstein had always hoped to write the Great American Opera. In the end he wrote West Side Story, the great American musical. More on this next time.