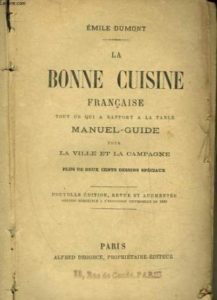 Inspired, as always, by the things around him, Leonard Bernstein (1918-1990) took a cookbook off the shelf and created a set of 4 humorous songs. 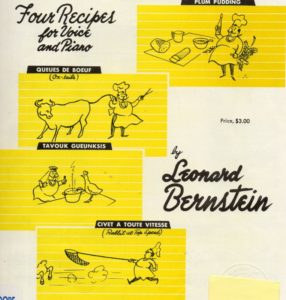 Rossini famously declared that he could set something as banal as a laundry list to music – can Bernstein succeed with recipes? Bernstein translated 4 recipes into English and set to work.

We start in the section on English Dishes and a fine plum pudding for 18-20 people. The trouble with a plum pudding is the number of ingredients – in the original Dumont recipe, there are 2 kinds of grapes, 3 kinds of candied peel, a lemon, eggs, 3 spices, some kidney fat, both flour and breadcrumbs, as so on. Bernstein doesn’t give you the ingredient list but gives you a selection of the directions for cooking – ‘now first you take…’ and later things are ‘browned in oil,’ and finally, you add ‘a half a teaspoon of table salt.’ There seems to be something fundamentally wrong with this recipe in Bernstein’s version as he says you should start with 11 pounds of juicy grapes, while Dumont’s recipe only calls for 250 grams (half a pound, at most).


In his recipe for Ox-Tail Stew, he doesn’t set the recipe directly, but rather makes a commentary on the dish. 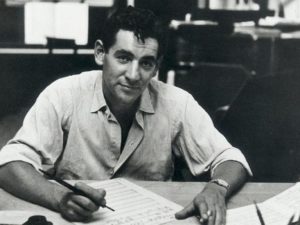 In the Turkish Pastry and Sweets section, we finally get a full recipe, as in Dumont, but with a reference to another recipe for mahallebi, which is not set. For ‘Tavouk Huenksis,’ we are directed to boil a chicken breast, shred it, and then add it to a rice porridge with milk and sugar (mahallebi). It’s a short recipe, and Bernstein adds his own Turkish sounds to the mix.


In the Game section is Dumont’s recipe for a rabbit stew – rabbit, pork, onions, and red wine. The interesting detail is that after you’ve brought everything to a boil, you ‘apply a fire’ and set the stew alight, before thickening it with a roux. In his setting, Bernstein omits nutmeg and a bit of fruit brandy. 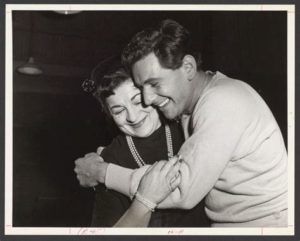 The first recordings were made in 1949 with Bernstein on the piano and Russian-born mezzo Jennie Tourel (1900-1973) singing. She worked with Bernstein, giving the premieres of a number of his songs, and the songs of Poulenc and Hindemith as well. She taught at the Juilliard School for a number of years.