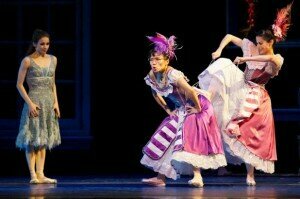 They are so familiar, the characters in the fairy tales and we know of their attributes: the loneliness of Cinderella before her triumphal return, the bravery of Little Red Riding Hood, the cleverness of Hansel and Gretel, and so many more.

Composers have taken up those stories and made everything from ballets and musicals to small set pieces. Let’s see who’s made it into music!

English composer Eric Coates wrote three fantasies for orchestra, the third of which was Cinderella. In this short 15-minute work, Coates starts with our heroine sitting sadly by the fire. Her Fairy Godmother arrives and everything is action: a dress, the coach, and Cinderella is off to the ball. She meets the Prince during the Waltz, runs off at midnight, is discovered by the Prince via her lost slipper, and then all live happily every after.

Alwyn: Cinderella (Ashley Wass, piano)
Sergei Prokofiev completed his Cinderella for the Kirov Ballet in 1944 and it was a success not only for its wonderful music but also the roles of the two step-sisters who are played as comic roles. In the Dancing Lesson and Gavotte, the two step-sisters attempt to learn how to dance before the ball, with humorous results.

The unnamed Little Red Riding Hood, starts off through the woods with a basket of goodies for her grandmother. One casual encounter with a wolf who then takes over the grandmother’s role and our heroine is in danger. Through Little Red’s clever questioning, all is revealed and, with the help of a passing woodsman, the heroine and her grandmother are safe.

American composer Seymour Barab wrote a number of children’s operas on fairy-tale themes, including Little Red Riding Hood, which takes great pains to show the actor playing the wolf getting on his makeup before the show so that the children won’t be frightened.

Barab: Little Red Riding Hood: Scene 1: The Wolf: I’m the Wolf (Herman Berisso, The Wolf)
Barab also wrote operas on Cinderella, Goldilocks, and The Pied Piper of Hamelin.
Sergei Rachmaninoff wrote two sets of piano study pictures, études-tableaux, and in 1929, the Italian composer Ottorino Respighi took 5 selected by Rachmaninoff and orchestrated them for the conductor Serge Koussevitzky for performance by the Boston Symphony Orchestra. Following the directions given to him by Rachmaninoff, Respighi titled the works and No. 3 is La chaperon rouge et le loup (Little Red Riding Hood and the Wolf). 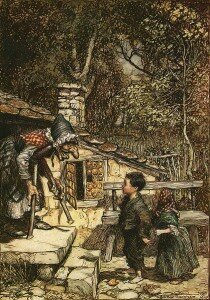 At the end of Tchaikovsky’s Sleeping Beauty, at the wedding scene, a number of the wedding guests are fairy-tale characters: Cinderella and her Prince, little Hop-o’-my- Thumb and his brothers, and Little Red Riding Hood dances with the Wolf.

Tchaikovsky: The Sleeping Beauty, Op. 66: (a) Chaperon Rouge et le Loup (Little Red Riding-Hood and The Wolf) (Slovak State Philharmonic Orchestra, Košice; Andrew Mogrelia, cond.)
In his opera Hansel und Gretel, Engelbert Humperdinck took the story of the two children who meet the witch with her enticing gingerbread cottage and created an opera with enormous appeal. One of the best-known songs from the opera, in English, is the dance between the two children.