Composers Inspiration
The Inspiration of Imagination – The Comics
by Maureen Buja February 6th, 2019 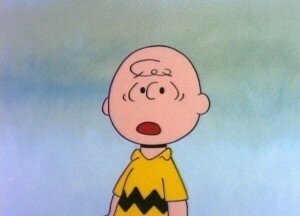 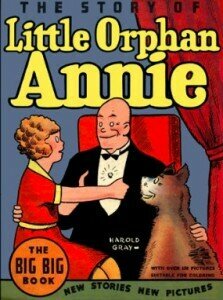 Strouse: Annie: The Hard-Knock Life (Alicia Morton, Annie; Marissa Rago, Pepper; Danielle Wilson, Duffy)
The world of Horton the Elephant, The Cat in the Hat and others was the source for 2000’s Seussical. In 2008, Shrek hit the stage. And in 2010, Charles Addam’s beloved Addams family hit Broadway. All were flops there, but have become very popular on high school stages.

Lippa: The Addams Family: Where Did We Go Wrong? (arr. for string quartet) (Lumiere String Quartet)
On the lighter side, when you take the theme from Addams Family television show and rearrange its original harpsichord sound with a bit of Bach on the side, it gets a lot more interesting.

The Addams family, from Cousin It to Uncle Fester

McAlley: The Addams Family Virginall (Elizabeth Anderson, harpsichord)
An even bigger flop was 2011’s Spider-Man: Turn Off the Dark, score by Bono and The Edge, directed by Julie Taymore who had made The Lion King such a success, but too costly in terms of money and damaged personnel. 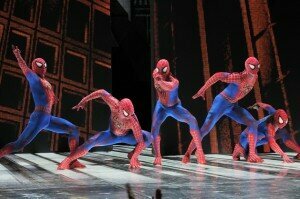 Spider-Man: Turn Off the Dark

Danish composer Bent Lorentzen combined 4 very different comics into one piece called, inevitably, Comics. He starts with Madeleine of the Paris boarding school run by Miss Clavel, and then jumps to Africa for Tarzan and another movement called The Elephant (do they mean Babar?), before the outer space adventures of Flash Gordon.

Lorentzen: Comics: III. Elefanten (Thomas Eje, narrator; Aarhus Symphony Orchestra; Frans Rasmussen, cond.)
We mentioned Charles Schulz’ Peanuts on Broadway, but Schulz and the composer Ellen Taaffe Zwilich each inspired the other. In 1990, Peppermint Patty and Marcie are at a concert, with a rousing cheer from Patty for Zwilich.

In return, Schulz commented on her piece in another cartoon, with Lucy having the last word.

Six years later, on a Carnegie Hall commission, Zwilich returned the favour with the Peanuts Gallery, setting six characters to music and starting the most musical of them all: Schroeder. 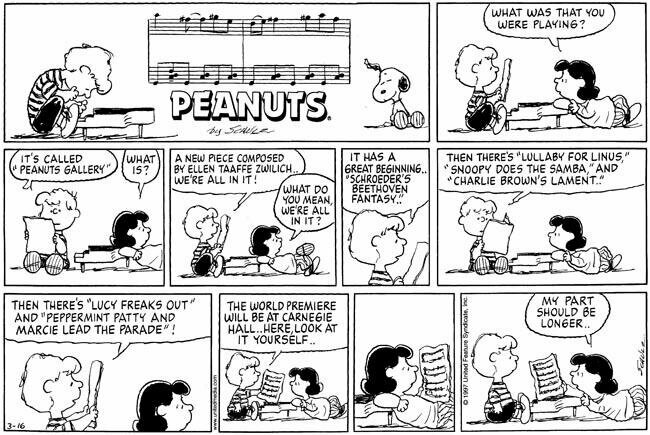 When we were little, the comics were the only part of the paper we read. Now, in the time of few newspapers, we turn to an even wider variety of online comics. We all read something different, so it’s more difficult to come up with a comic strip that everyone reads (such as Peanuts) to base a piece of music on.