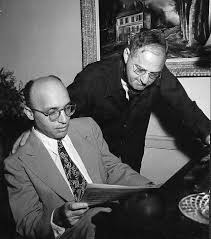 Liza Elliot (mezzo-soprano) is a successful editor of a popular fashion magazine. Nevertheless, she is highly uncomfortable with the success-oriented and male-dominated society. Liza is also conflicted about the love interests in her life, and she can’t decide between her business colleague Charlie Johnson (baritone), the publisher and current lover Kendall Nesbitt, and the glamorous film star Randy Curtis (baritone). When she consults her psychiatrist, each of the four sessions relives a dream. “Glamor Dream” projects a glamorous and sought-after woman, a character that Liza never feels like in real life. The “Wedding Dream” sees her marriage to Kendall Nesbitt interrupted by the appearance of Randy Curtis, and in the “Circus Dream” she is accused of being unable to make up her mind. Finally, the “Childhood Dream” recalls the traumatic childhood incidents that are at the root of her problems. 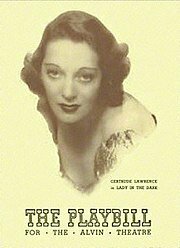 Lady in the Dark

The basic playbook for the musical Lady in the Dark was authored by Hart Moss and based on his own experiences with psychoanalysis. Ira Gershwin provided the lyrics and Kurt Weill composed the music. Weill’s music is almost entirely confined to the dream sequences, and includes such favorites as “One Life to Live,” “The Saga of Jenny,” and the lyrical “My ship.” The underlying musical current is Liza’s obsession with a tune she cannot finish, and which she will not name. The dreamlike mix of fantasy and reality provides a perfect arena for the seductive and dramatic power of Weill’s music. After a trial run in Boston, it opened on Broadway at the Alvin Theatre on 23 January 1941, and closed on 30 May 1942 after 467 performances. The New York Times wrote, “it uses the resources of the theater magnificently and tells a compassionate story triumphantly… The finest score written for the theatre in years…Gershwin’s lyrics are brilliant; a work of theater art.”