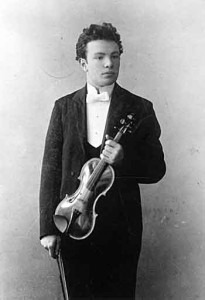 85 years ago, on 18 April 1936, Ottorino Respighi (1879-1936) died from an inflammation of the inner layer of the heart in Rome. Respighi lived and worked during tumultuous political times, and his historicist interest in Italian music and the arts made him and his music immediately popular. However, for many years after his death, his music was largely forgotten. Although primarily known for his lavishly orchestrated tone poems, Respighi also composed chamber music, choral and vocal compositions, and he wrote a number of operas. Born in Bologna, Ottorino showed early musical talent and soon became a gifted violinist. Yet, he was primarily attracted to composition and at age 13, during his study at the Bologna Conservatory, produced his first major work, the Symphonic Variations. After his graduation, Respighi decided to broaden his musical horizon and applied for, and was offered an engagement with the Imperial Theatre in St. Petersburg. He was soon fluent in Russian and studied composition with Nicolai Rimsky-Korsakov for five months. Upon his return to Bologna, Respighi joined the “Mugellini Quartet” as a violinist. Apparently, at some point during 1908-1909, he also briefly studied with Max Reger in Berlin.

The first decade of the 20th century saw an eclectic variety of compositions. Respighi composed his first opera, a piano concerto, and a number of chamber music compositions. In musical homage to J.S. Bach, he also fashioned a number of suites and dedicated transcriptions. A brilliant orchestral arranger, Respighi’s efforts were not limited to Bach as he also adapted works by Tartini, Vitali, and Rossini. In addition, he prepared critical editions and transcriptions of the music of Claudio Monteverdi and Antonio Vivaldi, prompting a critic to label his compositions “new old music.” In 1913, Respighi was appointed professor of composition at the prestigious Conservatory of Santa Cecilia in Rome, and he soon produced two tone poems that brilliantly evocate the Eternal City. In the preface to the Fountains of Rome of 1916, Respighi wrote, “In this symphonic poem the composer has endeavored to give expression to the sentiments and visions suggested to him by four of Rome’s fountains, contemplated at the hour in which their character is most in harmony with the surrounding landscape, or in which their beauty appears most impressive to the observer.”

Respighi: Concerto in the Mixolydian Mode for piano and orchestra

In 1919, Respighi married his composition student Elsa Olivieri-Sangiacomo, who had done pioneering work in the study of plainsong. Respighi quickly realized the enormous potential of these archaic melodies and encoded his impressions in the Concerto Gregoriano and the Concerto in the Mixolydian Mode for piano and orchestra. In addition, Respighi composed distinctive operas, “full of brilliant color and dramatic flair,” such as his masterpiece La Fiamma, the ironic Belfagor, and the delightful children’s opera Sleeping Beauty. Above all, Respighi’s works composed in the 1920’s reflect his fascination with early music and his desire to translate visual sensations into music. The conductors Toscanini, Koussevitsky, Fritz Reiner and Willem Mengelberg championed Respighi’s music, and he undertook two American tours as a conductor and pianist. Respighi was elected to the Academy of Italy in 1932, and personally met Busoni, Richard Strauss, Ravel, Schoenberg, Sibelius and Stravinsky. In January 1936, Respighi was diagnosed with Endocarditis caused by bacterial infection. He bravely struggled with the disease for almost four months, but eventually succumb to congestive heart failure. Elsa Respighi, a talented singer and composer in her own right, devoted herself to advocate her late husband’s musical heritage. She published books and organized conferences and performances. To promote musical education in Italy, she also founded the “Fondo Respighi” in Venice, which houses Ottorino’s musical estate. Elsa died in 1996 at the ripe age of 102.