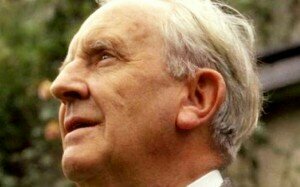 J.R.R. Tolkien created an entire world of high fantasy in his work The Hobbit and The Lord of the Rings. Creating the world of Middle Earth beginning with The Hobbit in 1937, he fleshed it out in the three volumes of The Lord of the Rings (1954-55) and intended to give the complete history of his invented world in The Silmarillion (1977); the latter book was completed by his son four years after Tolkien’s death in 1973.

In his soundtrack for the movie The Hobbit, composer Howard Shore created, as he had done for the earlier trilogy of movies based on The Lord of the Rings, a Celtic sound world that captured both the melancholy of these last days of Middle Earth and the aspirations of its bravest characters.

Shore: The Hobbit: An Unexpected Journey: My Dear Frodo

One of the great songs written by the fictional Bilbo Baggins in The Hobbit was the walking song, ‘The Road Goes Ever On,’ first sung by Bilbo as he returns to The Shire after his adventures. It also appears several times throughout The Lord of the Rings, often with altered lyrics. 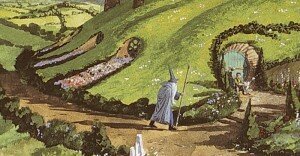 British composer Donald Swann took a number of texts given to him by Tolkien and created a song cycle in 1967, The Road Goes Ever On. The first song in the cycle comes from The Hobbit, the later ones from the trilogy. The music was deliberately written in the style of English folk song with the exception of the song ‘Namárië,’ which was a setting of a melody of Tolkien’s, which is closer to Gregorian chant in style. Tolkien liked Swann’s setting and was known to hum it to himself as he walked around Oxford. 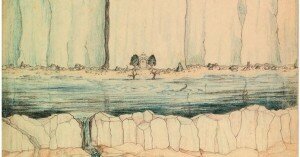 Sketch for the Entrance to Moria (Tolkien)

Inspired by Swann and their own musicological research, the group The Fellowship recorded their own reconstruction of the music for Middle Earth. Sung in Tolkien’s Elven language of Quenya, ‘Namárië’ follows Tolkien’s idea of Gregorian chant as used in the Swann song cycle.

In larger symphonic works, the whole cycle has been set by composers such as Johan de Meij and Craig Russell. In 1984, Meij completed his Symphony No. 1, ‘The Lord of the Rings’, with movements on the characters Gandalf and Gollum, and on places such as the woods of Lothórien, the Mines of Moria and The Bridge of Khazad-Dûm, finishing with Hobbits. 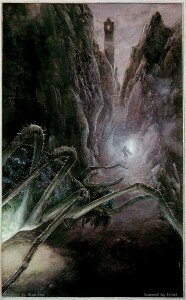 Meij: Symphony No. 1, “The Lord of the Rings”: IV. Journey in the Dark: a. The Mines of Moria – b. The Bridge of Khazad-Dum (Peabody Conservatory Wind Ensemble; Harlan D. Parker, cond.)
In 1995, American composer Craig Russell was commissioned by the San Luis Obispo Youth Symphony to write a piece for their string ensemble, the Junior Strings. He later re-worked it for full orchestra, adding two more movements. Russell looked at the characters of the trilogy and the overall story line to create his Middle Earth. In ‘Shelob’s Lair’, Russell uses sounds generated by the percussionists to imitate the giant spider in her lair. 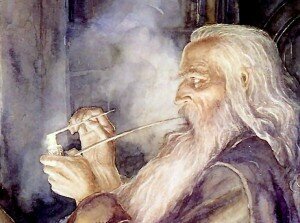 Russell: Middle Earth: Shelob’s Lair (San Luis Obispo Symphony Orchestra; Michael Nowak, cond.)
In 1996, Finnish composer Aulis Sallinen took the idea of The Lord of the Rings as the source for his Symphony No. 7. Unlike the other composers, he didn’t depict the events of the novel, but rather the reading experience. He sees the work as transferring “the literary atmosphere and poetry into a musical expression.” This title for the Symphony, The Dreams of Gandalf, bring into focus Gandalf’s role as the wizard who always had the larger picture in his mind. 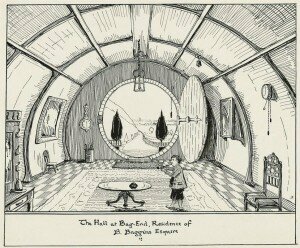 Sallinen: Symphony No. 7, Op. 71, “The Dreams of Gandalf” (Rheinland-Pfalz State Philharmonic Orchestra; Ari Rasilainen, cond.)
José Luis Turina wrote his Scherzo para un hobbit in 1997. He started with a poem by Luis Cernuda, ‘Scherzo para un elfo’ and transformed the elf into a hobbit, as his children were reading The Lord of the Rings at the time. His hobbit is made of a large quantity of changing musical materials, yet the rondo form brings us back to his fundamental form. 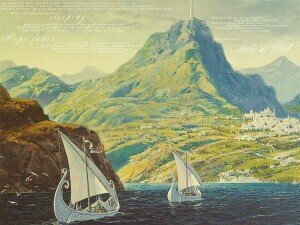 Into the West (Nasmith)

Turina: Scherzo para un hobbit (Plural Ene’ll closemble; Fabian Panisello, cond.)
For many listeners, it is the music of Howard Shore that currently fulfils our imagination about the world created by J.R.R. Tolkien. Shore closed his music for The Lord of the Rings with the song ‘Into the West,’ where Bilbo finally leaves Middle Earth with the last of the elves from the Grey Havens to the Undyng Lands to end his story.

Shore: Return of the King: Into the West