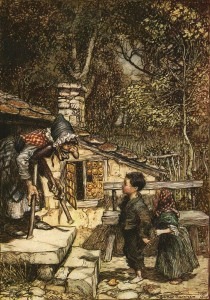 The tale of the two children and how they fool the wicked witch who has captured them in her gingerbread house has become a holiday opera. The recasting of the Grimm Brother’s tale into something more family friendly was done by Adelheid Wette, sister of the composer, Engelbert Humperdinck.

The original story comes from the Brothers Grimm, published in 1812 and is a dark story of hunger and starvation, deliberate abandonment, cannibalism, and death. In the Grimms’ story, Hansel and Gretel are abandoned in the woods by their father and stepmother because there isn’t enough food for all. They find a house built of bread and cakes and begin to eat it in their hunger, and are to be enticed inside by a kindly old woman who offers them dinner and nice beds. In the morning, however, Hansel is in a cage to be fattened up for dinner, while Gretel becomes the house keeper. When the witch prepares the oven for the Hansel-dinner, she is tricked into leaning into it and Gretel pushes her in and locks the door. She frees Hansel, they find the witch’s jewels, and take them home to their father, who tells them that their stepmother has died. The wealthy family lives happily ever after.

In the opera, the children are happily at home with their parents, doing housework. They interrupt their work to dance, in one of the best known songs from the opera:

Humperdinck: Hansel and Gretel: Act I Scene 1: In the Cottage: Brother dear, come dance with me (Gretel, Hansel)(Susanne Mentzer, mezzo-soprano; Heidi Grant Murphy, soprano; Milwaukee Symphony Chorus; Milwaukee Symphony Orchestra; Andreas Delfs, cond.)
Mother arrives and is furious that they are dancing and not working. She sends them out in the forest to look for strawberries. Father arrives with a feast and, the children not being back, the parents run into the forest to find them, fearing that they might have met the evil Gingerbread Witch.

Act I Scene 3: Prelude: The Witch’s Ride
Act II is set in the forest as the children hunt for strawberries, and then their hunger getting the best of them, they eat what they have found. Darkness having fallen, they cannot find their way home, so they lie down to sleep on the forest floor, and 14 angels come to protect them. The evening song, ‘Abendsegen,’ is a beautiful close to the act. 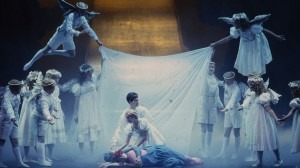 Act I Scene 3: In the Wood
In Act III, they find the gingerbread house, surrounded by a fence of gingerbread children. They nibble on the house and out comes a woman who captures Hansel with a rope. She explains that she loves feeding children sweets but the children are a bit dubious and start to run away. She freezes them with her wand. Hansel is put into a cage and Gretel is told to bring food to fatten him up. The witch opens the oven where she is cooking gingerbread and asks Gretel to check it. She pretends not to understand and when the witch shows her what to do, the witch is shoved in the oven – it begins to crackle and burn and then explodes. The gingerbread fence turns into living children and in the distance, Father can be heard calling Hansel and Gretel. The witch has turned into gingerbread and all ends well for everyone else. 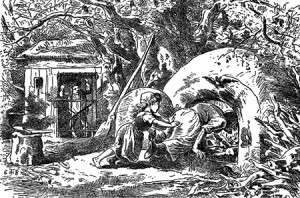 The Witch is pushed into the oven, by Theodor Hosemann

Act III Scene 4: The Gingerbread House: We’re safe, we’re sure for ever more! (Susanne Mentzer, mezzo-soprano; Heidi Grant Murphy, soprano ; Robert Orth, Father; Milwaukee Children’s Choir, Milwaukee Symphony Chorus; Milwaukee Symphony Orchestra; Andreas Delfs, cond.)
The change of the grim Brothers Grimm story into one with a more religious tone, such as the angels protecting them at rest in Act II, and other religious references in other acts, and the removal of the evil stepmother, the necessity for the children to be abandoned, and the fact that the oven makes gingerbread rather than cooks children makes it more suitable for a holiday festival.

The opera has always been associated with Christmas since its earliest performances, and had its premiere on 23 December 1893 at the Hoftheater nin Weimar, conducted by Richard Strauss.