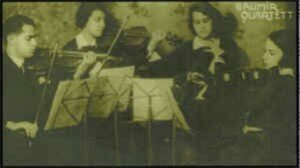 Civilization survived the exuberant nationalism of World War I (1914-1918), bruised but still intact. Weapons technology did not yet match military ambition, and civilians were spared.

Artistic communities shrank, yet cultural life flourished in major cities. Pupils enjoyed adequate educational infrastructure, and professionals were allowed to teach and perform unimpeded, even when stranded in foreign or enemy territory; Wanda Landowska (born in Russian Poland) continued her ground-breaking harpsichord classes at the Berlin Hochschule fur Musik (1912-19), while Sergei Diaghilev’s Ballets Russes awaited in Spain (1914-18) the return of peace, thereafter relaunching their careers during the prosperous decade of the 1920s.

In contrast, the decade preceding WWII was consumed with rival ideological responses to Great Depression poverty – and a desperate race for armed supremacy. Civilians were targeted from the outset, as aerial bombardment turned cities into battle zones: Warsaw, London, Stalingrad, Dresden, Hiroshima.

Composers and musicians were treated with particular ruthlessness, disproportionate to their numbers and political-economic influence. The turmoil of 1933-1949 actually smashed the momentum and continuity of musical craftsmanship, research and performance stretching over the 17th, 18th and triumphant 19th centuries.

Fortunately, enough great artists survived to transmit their insights to a post-War generation of students and new audiences, through live performance and recordings, notably thanks to American hospitality and technical support. Ethnic diversity, and an expanding cultural infrastructure following the Civil War, led Americans to embrace music and art in a spontaneous, respectful and non-partisan way, quite refreshing for Europeans fleeing ideological entanglements.

Foremost among these, legendary Arturo Toscanini (1867-1957) – emphatically anti-Fascist – would be the oldest conductor to survive into the 1950s. In 1937, the Radio Corporation of America set up the NBC Symphony Orchestra, a radio orchestra made up of the finest highly-paid virtuosos, to showcase his artistry in weekly concerts. 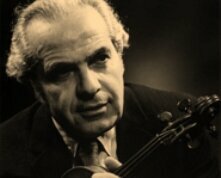 Among top musicians fleeing Europe to find secure employment under Toscanini, were: Daniel Guilet of the celebrated Quatuor Calvet and Beaux Arts Trio, and Felix Galimir of the brilliant but short-lived Galimir String Quartet of Vienna (1927-36).

The Galimirs belonged to the Sephardic Jewish community, which had prospered for a millennium in the Iberian peninsula – until 1492, when expulsion from reunified Spain forced their resettlement around the Mediterranean. Reaching Vienna by the 18th century, they flourished under Emperor Franz-Joseph’s 1867 Constitution, guaranteeing freedoms throughout the Austro-Hungarian Empire. The city’s overall Jewish population between 1857 and 1923 increased from 2,000 to 200,000 (10% of its 2,000,000 inhabitants), forming a significant proportion of the middle class.

Felix Galimir and his three sisters were mostly teenaged Conservatoire pupils when they officially formed the Galimir String Quartet in 1927 – to commemorate the 100th anniversary of Beethoven’s death.

Their Austrian mother and Romanian father’s businesses in central Vienna, though challenged during WWI, recovered sufficiently for the children to follow the best musical opportunities. Initial music lessons took place at home and in elementary school. Felix (1910-1999) and Adrienne (1912-1997) played violin, Renée (1908-1973) played viola and Marguerite (1905-1985) was a late comer to the cello.

They attended the New Vienna Conservatoire where Polish professor of chamber music, Simon Pullman (1890-1942) guided them through the “unplayable” Lyric Suite by Alban Berg (1885-1935). Berg was impressed and coached them towards a successful public performance, then gratefully dedicated Felix’ score: “To Felix Galimir, the outstanding quartet leader, famous violinist, wonderful musician, in remembrance, 9 April 1931”.

Their recording of the Lyric Suite in Paris mid-1935, would be the first ever recording of a Berg composition, broadcast in the UK in October 1935 (Gramophone), two months before the composer’s death of septicaemia. Reissued in 1991, it won a Gramophone Award.

The Galimir’s use of vibrato was very subtle, at times non-existent.

Ravel, who stopped composing due to a mysterious cerebral condition, heard them perform his quartet, and supervised its recording in Paris in 1934 – astounding virtuosity at the service of Ravel’s musical idiom! 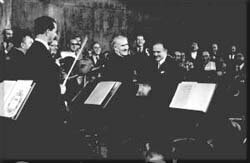 These masterful recordings – a fraction of their repertoire – were the only ones made by the young Galimir String Quartet, just as European politics soured. Felix, accepted into the Vienna Philharmonic Orchestra in June 1936, was ejected in September, when Nazi-inspired anti-Semitic policies were implemented.

Realizing the looming danger, the siblings gave two highly acclaimed farewell concerts in Vienna and Paris in November 1936, then quickly dispersed – never again to record nor perform together as a quartet!

Marguerite enrolled at the University of Paris, where she remained with her widowed father until the perilous first year of Nazi occupation.

The family’s ultimate salvation came through Adrienne’s 1935 marriage to American violinist Louis Krasner (1903-1995), a pupil of Lucien Capet and Carl Flesch. Inspired by a home performance of the Lyric Suite, Krasner commissioned a Violin Concerto from Berg, who completed it four months before death. Krasner premiered it posthumously in Barcelona in April 1936, before returning to NY with Adrienne in November, following the siblings’ farewell concerts.

Krasner later arranged for Felix to join the NBC Symphony in 1939. When Toscanini retired in 1954, Felix became concertmaster of the renamed Symphony of the Air, under Leopold Stokowski (who conducted Krasner in the 1940 premiere of Schoenberg’s Violin Concerto, with the Philadelphia Orchestra).

Felix founded another Galimir String Quartet with different associates, making several notable post-War recordings. It was, however, his teaching between 1954-99 on the faculties of the Marlboro Music School, Juilliard School, Curtis Institute and Mannes School of Music that secured his reputation.

Marguerite and her father fled Paris in 1941, and settled in NY. Abandoning music, she built a costume jewellery business.

Renée, still in Palestine, married Walther Hurtig in 1944; he died in 1949. Renée finally settled in NY with her children in 1952, playing and teaching till her death in 1973.

Adrienne and Louis Krasner moved to Syracuse NY in 1949, established the Syracuse Friends of Chamber Music, and taught at Syracuse University, playing and teaching till the end of their long lives.

Many Galimir family members and friends in Europe were not so lucky.

Their chamber music professor, Simon Pullman, was visiting Warsaw to sell a property when Nazi forces invaded Poland. Confined to the Ghetto, he directed the Warsaw Ghetto Symphony Orchestra until he, the orchestra and thousands more were transferred to the Treblinka concentration camp, and perished.