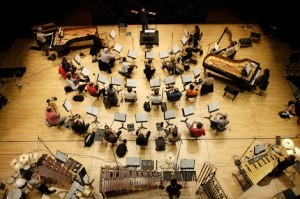 Musicians have long known that playing or singing in an ensemble can be one of the most rewarding and enjoyable musical experiences. The process of making music with friends or like-minded musicians provides the unique opportunity to discuss interpretative opinions, and just like a good marriage, it allows participants to hopefully come up with a satisfying musical and artistic consensus. True to life, ensembles come in all shapes, forms and sizes, and chamber music ensembles have played an intrinsically important role in shaping musical and cultural discourse. Having previously looked at the Giants of the string quartet, we now take a highly personal look at other exceptional constellations on the vast firmament of classical music ensembles. So let’s get started with the Beaux Arts Trio, an ensemble that has been described as the “gold standard for trios throughout the world.” Founded by Menahem Pressler, Daniel Guilet, and Bernard Greenhouse in 1955, the ensemble has maintained its freshness of performance and interpretation over the last 50 years! This multigenerational piano trio has appeared in at least 6,000 performances, carefully preserving its distinctive musical heritage.

They invented an entirely new kind of ensemble, and have entertained audiences for over 40 years. No wonder the Canadian Brass has been called “the world’s most famous brass ensemble.” The ensemble has produced more than 130 recordings and made more than 7000 live appearances around the world. They have sold well over 2 million albums worldwide, with television audiences numbering in the billions! And let’s not forget countless Grammy, Juno, Ensemble, and Individual Awards! The ensemble has perfected a unique stage presence, combining entertainment, theatrical effects, spontaneity, virtuosity, and, most of all, fun. However, the music itself has remained central and is performed with utmost dedication, skill and excellence. Every concert features a full range of compositions, including Baroque and Dixieland tunes, Marches, Latin selections and popular songs. Every conceivable music style—from Gabrieli to Gershwin is addressed—and that includes works and arrangements especially created for the group. After four decades, the Canadian Brass has practically become an institution as they single-handedly elevated the art of the brass quintet to dizzying heights.”

At one point or another, every pianist dreams of a glittering solo career. And even if that dream, against all possible odds, becomes a reality it does not automatically guarantee success on the ensemble stage. We all have sat through miserable performances of highly acclaimed soloists joining ensembles in various sight-reading sessions! This kind of phenomenon, although highly profitable for promoters and no less popular with stargazers, seems to happen with increased regularity. That said, any pianist who deems the Brahms Op. 25 piano quartet sight-reading material, should be sent to bed without dinner! There was no such drama when Artur Rubinstein joined members of the Guarneri Quartet. The dialogue between piano and ensemble becomes a hermeneutic window into Brahms’s shifting harmonic colors, exuberant eruptions, orchestral conception and extended lyricism. Flawless interpretation and passionate intensity combine to produce the greatest performance of all 3 Brahms piano quartets ever recorded. Performance styles will invariably change over time, but genius performances will always stand the test of time.

Would you believe that it took until 1976 for the 20th century to have its first permanent contemporary music ensemble exclusively dedicated to the performance of contemporary chamber music? No joke, as composer and conductor Pierre Boulez started his ambitious project to create “a musical center in which experimentation can take place on a permanent basis,” with support from the French government in that year. A dedicated 31-piece orchestra, the “Ensemble InterContemporain,” supports significant research into acoustics, instrumental designs and into the process of composition itself. Incorporating American computer music expertise and related technologies brought musicians and scientists into close contact, predictably not always in the most harmonious way. The Ensemble has over 2,000 contemporary works in its repertoire, and is known for its strong emphasis on music education. That includes playing dedicated concerts for kids, and participating in various training programs for future performers, conductors, and composers. It took the Ensemble InterContemporain to make contemporary music truly contemporary!

Post-modernity and Neo-romanticism have reinterpreted and reinvented traditional music ensembles. If you don’t believe me, just ask cellist Yo-Yo Ma, who initiated the Silk Road Project in 1998. He sought to build cultural understanding by sharing ideas and experiences within communities and across traditional boundaries. According to Yo-yo, “this exchange confirms and nourishes our shared humanity and permits collaborations that generate vibrant communities, spark creative technologies, and create meaningful contemporary art.” And it is no surprise that Yo-Yo has chosen music to express the richness of this cultural collaboration. The Silk Road Ensemble features performers and composers from more than 20 countries, and has been called a “roving musical laboratory without walls.” Musicians co-create art, performance, and ideas—and tellingly—celebrate ways in which culture brings us together. This is not your grandma’s musical ensemble, but it is the way of the future!