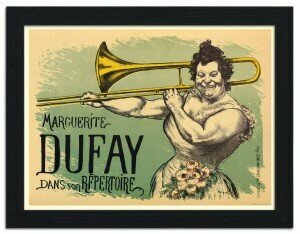 It was always easier to laugh at women instrumentalists than to take them seriously. Entertainer Marguerite Dufay played in the Parisian music cafés in the late 19th century, classified as a ‘comique excentrique.’ A comic eccentric was a performer in the 19th century Parisian music halls and comic-cafes who played not only regular music instruments but also created instruments or sound objects such as bottles, anvils, hammers and such like.

This 1894 poster, by Louis Anquetin, is very much a caricature of a wild woman, with huge biceps, a rough face, and uncontrolled hair. 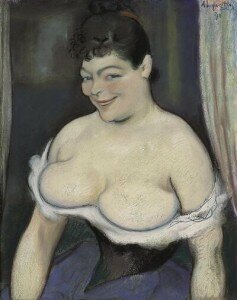 In an earlier painting of her, Anquetin treated her the same way: unrealistic bosom and minuscule waist, although without the trombone.

Yet, in both images, her smile is infectious and as writer Charles Hiatt said, the poster is a ‘piece of triumphant vulgarity.’