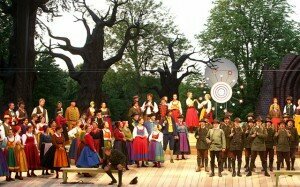 The hunting profession—something we call “Wildlife management” in the 21st century—has long helped to maintain a population of healthy animals within an environment’s ecological capacity. Controlling the wildlife and predator population was of particular importance in the densely forested regions of central Europe during the 18th and 19th centuries, and the job of gamekeeper or game warden was a highly respected profession. Hunters formed professional associations, and weekly meetings frequently featured musical togetherness in the form of choral singing in praise of the hunt. 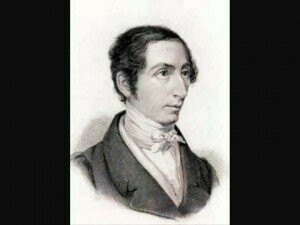 “What pleasure on earth can compare with that of the hunter,” asks the famous Hunters’ Chorus in Carl Maria von Weber’s opera Der Freischütz. Inspired by a German folk legend, that chorus paints a musical picture of a hunting scene. The hunters are ready to depart for the mountains and chasms, and the horn calls them to work. Galloping horses and the breathless action of the hunt is amplified by blaring horns and rich orchestral support.

One of the most famous composers of popular chansons in the Renaissance, Clément Janequin (c.1485-1558) was at the forefront of developing the programmatic type of Parisian chanson. These long, section pieces cleverly imitated natural or man-made sounds, and the advent of music printing assured that his fame spread throughout Europe.
La bataille (Escoutez tous gentilz) is probably his most famous chanson, and it was written to celebrate the French victory over the Swiss Confederates at the Battle of Marignano in 1515. It imitates battle noises, including trumpet calls, cannon fire and the cries of the wounded! His chant des oiseaux imitates birdcalls, and the four-part chanson La Chasse of 1529, contains in its second part a most graphic representation of a hunt. Each hound is called by name, and amidst a clamor of barking and shouting huntsmen, the closing measures imitate the sounds of the hunting horn. 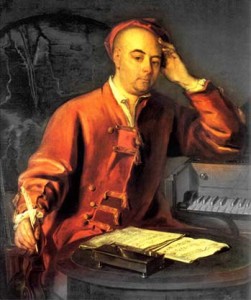 George Frideric Handel traveled to Italy in 1706 at the invitation of one or another member of the Medici family, who had a keen interest in making Florence the musical capital of Italy. Regardless, Handel ended up in Rome and composed a substantial number of cantatas in pastoral style for musical gatherings in the palaces of cardinals Pietro Ottoboni, Benedetto Pamphili and Carlo Colonna. In all, Handel wrote over a hundred such cantatas, but they remain some of his least known of his compositions. 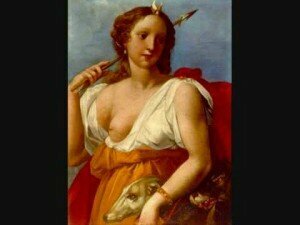 Since these works date from a relatively early stage of Handel’s career, it was long assumed that these “student works” hold little musical interest. That’s certainly not the case in Handel’s celebration of the hunt in his cantata All caccia “Diana cacciatrice.” It was probably composed for performance at the Marchese Ruspoli’s country estate in Vignanello, fifty miles north of Rome, and prominently features the voice of the hunting deity Diana.
George Frideric Handel: Alla caccia “Diana cacciatrice,” HWV 79 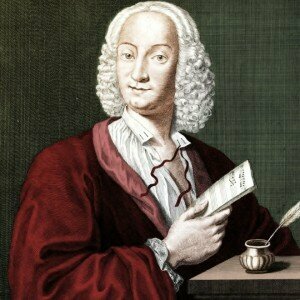 Antonio Vivaldi published his first concertos in 1712/13. Charles Burney writes, “among flashy players, whose chief merit was rapid execution, these works occupied the highest place of favor.” In subsequent years, Vivaldi churned out a goodly number of concertos, and in 1725 he published his Opus 8, a set of 12 concertos for violin, strings, and basso continuo, which he called “”Il Cimento dell’armonica e dell’inventione” (The Combat of Harmony and Invention). This set contains the four famous concertos we know as the “Four Seasons,” and as we have heard in our last hunting episode, Vivaldi referenced the hunt in the “Autumn” concerto. However, the Opus 8 also contains a three movement concerto in B flat major exclusively titled “La caccia” (The Hunt.) The orchestral violins imitate hunting horns and the solo violin sections pursue the rural imagery with the evocation of horn calls and galloping horses. A pastoral central “Adagio” prepares for the evocation of a jubilant village dance after the hunt in the concluding movement.