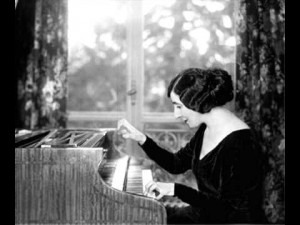 We should actually entitle this one “Forgotten Keyboardists…” because Wanda Landowska (1879-1959), actually did more for the harpsichord than for the piano. She began her piano study at age 4 and studied in Warsaw, Berlin, and Paris. By 1912, she was teaching harpsichord at the Berlin Hochschule für Musik.

Her harpsichords were not the fragile wooden instruments we know today but were robust metal-framed instruments that owed much to piano construction. She commissioned her instruments from the French maker Pleyel and although these instruments have two keyboards like a harpsichord, they also have the characteristic side curve and a metal frame like a piano.

She was the first to record Bach’s Goldberg Variations on the harpsichord (1933).

Bach: Goldberg Variations, BWV 988: Aria (Wanda Landowska, harpsichord)
We may find this performance rather laboured, compared with the more facile versions by performers such as Glenn Gould, but she also was working with an instrument that was much more difficult to play than the modern piano. The primary sounding device of a harpsichord is the forcing of a plectrum (originally a goose quill) up so that it plucks a string – with her Pleyel harpsichords, the action is very, very stiff, and requires a finger strength that few could master. 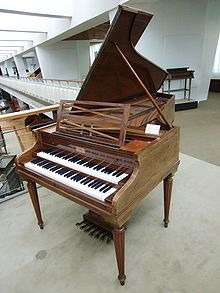 Her championing of a virtually forgotten instrument brought it back into fashion and was important in the beginnings of the renaissance of baroque instruments that started in the 1920s, In addition, composers such as Manuel de Falla and Francis Poulenc wrote works for her to bring the harpsichord into the modern milieu.

Falla: Concerto for Harpsichord, Flute, Oboe, Clarinet, Violin and Cello: I. Allegro (Elizabeth Anderson, harpsichord; Schirmer Ensemble; Brett Kelly, cond.)
Her teaching time in the 1920s was split between the US, where she taught at the Curtis Institute in Philadelphia from 1925-1928, and France, where she established the École de Musique Ancienne in Paris in 1925. At her home in Saint-Leu-la-Forêt, 20 miles outside Paris, she established Le Temple de la Musique Ancienne where she worked and taught from 1927 until 1940. She fled France at the German invasion of 1940, taking only two suitcases, and leaving her instruments and music behind, to be lost and stolen.

She resumed her teaching career in the US and had an extensive performance career. In bringing back the harpsichord, and with it the rediscovery works such as the Goldberg Variations, Landowska gave us back a valuable part of music history that still continues today. Her last pupil, Rafael Puyana, performs here in a 1968 work for guitar, viola da gamba, and harpsichord.