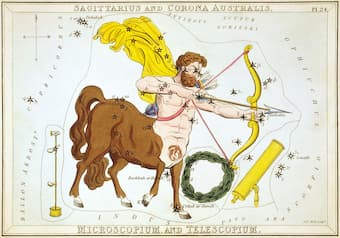 Chiron was a centaur of Greek mythology, and his stepfather Apollo taught him the art of medicine, herbs, music, archery, hunting, gymnastics and prophecy. In essence, Chiron was able to “rise above his beastly nature.” Centaurs were notoriously wild, lusty, overly indulgent drinkers and violent when intoxicated. Chiron, however, was intelligent and kind and he is credited with the discovery of botany and pharmacy. In the end, Chiron exchanged his immortality for the life of Prometheus—the titan who allowed mankind to obtain the use of fire—and for that reason, Zeus placed him among the stars in the sky to be honored. 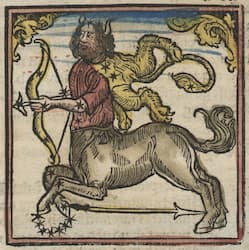 As Sagittarius he rules the nightly sky between approximately 23 November and 22 December. Individuals born under this sign are curious and energetic, and their philosophical view motivates them to wander around the world in search of the meaning of life. In 1975, Canadian composer Malcom Forsyth wrote his Concerto Grosso subtitled “Sagittarius” for the Canadian Brass. The second movement became an instant hit, and his daughter Amanda asked her father to fashion an arrangement for cello. 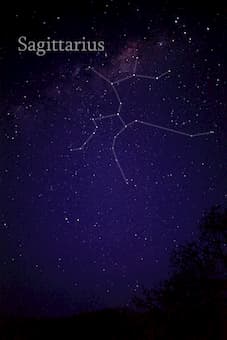 Centaurs are creatures half-man and half-horse. The head, arms and torso are human and joined at the waist to the body and legs of a horse. Frequently represented in Greek architectural sculpture and pottery decoration, one can almost sense the contradictions governing this creature’s personality. Baptized on 17 December, Ludwig van Beethoven could easily be described as the veritable poster child for the Tropic of Sagittarius. Beethoven wasn’t particularly well educated, but his strength of character produced powerful effects on those around him. Supremely idealistic and eternally in search of tranquility and freedom, he showed utter distain for discipline and authority. 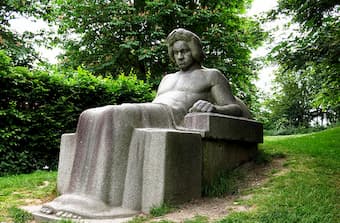 Often impatient and tactless, he thought exceedingly highly of himself in artistic matters. And while he did accord the greatest respect to other artists, he had very little use for common humanity. And like a true Sagittarius, he absolutely loved the outdoors. For Beethoven, nature was a place of relaxation, solitude and inspiration. As he writes, “How happy I am to be able to walk among the shrubs, the trees, the woods, the grass, and the rocks! For the woods, the tress and the rocks give man the resonance he needs.” And Beethoven certainly felt the presence of God in the beauty of nature. 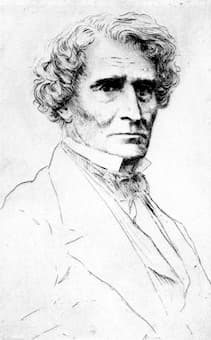 Portrait of Berlioz by Alphonse Legros

Individuals born under the sign of Sagittarius hate to be constrained. Extremely free-spirited, once they have made up their minds they will do everything possible to achieve their goals. Born on 11 December in a small provincial town in the French Alps, Hector Berlioz was destined to become a physician. Inflamed by a deeply burning passion for poetry, literature, theater and music, however, the young Berlioz quickly rejected his father’s wishes and settled in Paris. His family vigorously objected and withheld all further financial support. Throughout his life, Berlioz struggled financially but tirelessly fought for the acceptance of his artistic ideas. Although he explained with great clarity the nature of his inspirations, his sources, aims and meanings, he was widely misunderstood in his own lifetime. True to the nature of a Sagittarius, Berlioz and his music resist easy classification. He simply refused to fit neatly into one category or the other, as he manipulated and freed all aspects of his music in order to lead them to a broader artistic end—whether rhetorical, dramatic, or musical. 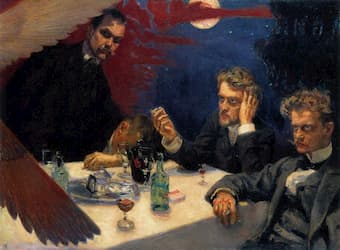 Akseli Gallen-Kallela, Symposium, 1894. Sibelius and other artists met regularly for nights of drinking and discussion, the group was known as the Symposium.

Born on 8 December, the music of Jean Sibelius matches the manic-depressive extremes of his personality. In 1927, at the age of sixty-one, he wrote in his diary, “Isolation and loneliness are driving me to despair… In order to survive, I have to have alcohol… Am abused, alone, and all my real friends are dead. My prestige here at present is rock-bottom; Impossible to work; If only there were a way out.” Caught between grandiosity and self-loathing, Sibelius was a difficult person to get to know. Sibelius actively discouraged the publication of intimate information about himself, believing that his thoughts and ideals should be revealed to the world only through his compositions. Yet on the other side of this personal and highly emotional rollercoaster was a true and fun-loving Sagittarius, who enjoyed making and spending money. Considered to be the happiest sign of the zodiac, Sagittarius take risks and don’t much care how they make and spend money. Once he had achieved a certain level of notoriety, Sibelius jumped head over heels into the good life in Helsinki. He spent exorbitant amounts of money on champagne, lobster, and exclusive cigars with disastrous effects on his health. Sibelius had a tumor removed from his throat, and his sparkling lifestyle drove his marriage to the point of collapse and his fragile mind into yet another bout of clinical depression. 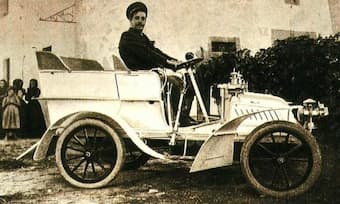 Giacomo Puccini behind the wheel of a de Dion-Bouton “Populaire” tonneau, c. 1902

Having fun and taking risks was certainly part of Giacomo Puccini’s life. Born on 22 December, Puccini had a penchant for fine cigars, quality spirits and every woman he could possibly get his hands on. And did I mention excessive gambling and hunting with country friends in the Florentine marshes and woods? Yet his most cherished pastimes since 1901 involved driving fast cars and speedboats. He bought the latest and fastest automobiles, and his yachts were named after the works whose proceeds financed them. His fanatical obsession with motorcars almost caused his premature death. In 1903 he had a very serious accident, when his car went off the road, flipping and rolling down a slope. His wife and son escaped serious injury, but Puccini was pinned under the vehicle with a section of the car pressing down on his chest. The accident caused a severe fracture of his right leg, and it took the quick intervention of a doctor living nearby to actually save his life. His wounds, however refused to heal and the composer dejectedly writes, “They un-bandaged me yesterday, and progress was so insignificant that the doctor declared I will have another three months of it, if all goes well… Farewell to everything, farewell Butterfly, farewell my life!” Luckily, he was able to continue the Butterfly project and almost finished Turandot as well.