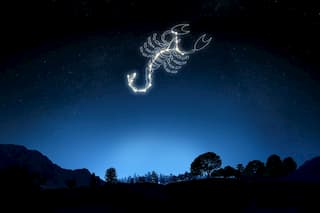 The constellation of Scorpio is associated with a number of myths. In one version rooted in Greek mythology, the legendary hunter Orion boasted to the goddess Artemis that he would kill every animal on Earth. Insulted by Orion’s excessive pride, Artemis sent a scorpion to kill Orion. Their heroic battle caught the attention of Zeus, who raised both combatants to the sky to serve as a stern reminder for mortals. 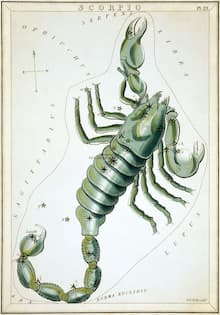 To this day, when Scorpio rules the night sky—from about October 23 to November 21—Orion goes away. It has been said the Scorpio is one of the most misunderstood signs of the zodiac. Because of its incredible passion and power, Scorpio is often mistaken for a fire sign. In fact, Scorpio is a water sign that derives its strength from the psychic and emotional realm. Extremely clairvoyant and intuitive, individuals born under the sign of Scorpio are imaginative and intense. They are ruled by Pluto (god of the Underworld) and Mars (god of War), and always know what they want and how to get it. Composer and pianist Roderick Elms, who for many years was the London pianist to cellist Mstislav Rostropovich as well as organist to the London Symphony Orchestra, provides his musical take on this powerful astrological sign. 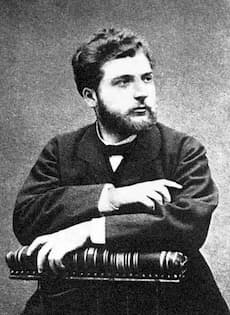 Born on 25 October, Georges Bizet was a brilliant student at the Conservatoire de Paris, winning a great number of prizes including the prestigious Prix de Rome in 1857. Once he had returned to Paris after almost 3 years in Italy, he quickly found out that his music was not in demand. In the true spirit of a Scorpio, Bizet was nevertheless determined to orchestrate a career in music. His intentions weren’t necessarily nefarious, he simply knew what he wanted and wasn’t afraid to work hard to realize his ambitions. He was greatly optimistic about the premiere performance of his opera Carmen on 3 March 1875. In the event, it turned into a veritable disaster. The opera was on the verge of being withdrawn, and it has been suggested that the theater had to give away free tickets in order to boost attendance. Bizet, unfortunately died a mere three months after the premiere, and it is suspected that the negative reception contributed to his fatal heart attack. As a biographer wrote, “The spectacle of great works unwritten either because Bizet had other distractions… or because of his premature death, is infinitely dispiriting, yet the brilliance and the individuality of his best music is unmistakable.”

Born on 14 November, Aaron Copland had a gift for natural leadership, and a great talent for management in all walks of life. On the outside, he displayed a deep calm while his true feelings were hidden deep within. Sensitive to the feelings of others, he displayed the greatest tact in all social interactions. Copland had a thorough understanding of the material world, and he clearly knew that his power and influence must be used for the benefit of mankind. And like a true Scorpio, he had the ability to inspire people and direct them to become part of his vision. Copland was a meticulous and hard worker, but he was easy going in almost all social situations. Realism was part of his nature as he dressed simply, yet he remained mysterious and sensitive. Copland easily bounced back from professional and personal failures, and true to his zodiac, he was wisely assertive throughout his life and in his music. 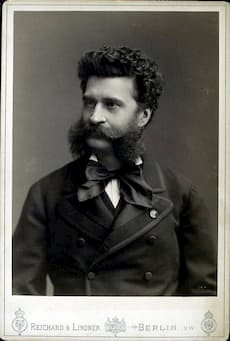 Seductive and beguiling, Scorpio is the sign most closely associated with sex. Sex isn’t solely about pleasure for the sensual scorpions, as they also crave the physical closeness, spiritual illumination, and the emotional intimacy that sex can provide. Well, Johann Strauss II, born on 25 October, certainly wasn’t shy when it came to sexual adventures. Like any good son, he initially tried to outdo his father in all aspect of life, particularly in music and sexual promiscuity. He mesmerized Viennese audiences, and in a blatant repeat of history, Vienna’s female population would swoon at the mere mention of his name. His popularity with the ladies got him into serious trouble, as on more than one occasion, jealous husbands challenged him to duels, and once he even had to seek refuge in the Austrian Embassy, barely escaping a double-barrel shotgun gently inviting him to marry a young Russian maid. When a planned marriage did not materialize, Strauss bedded dozens of eager groupies. Strauss II eventually did marry the mistress to a high-profile banker, but following her death, he frequented the local bordellos and after seven weeks he was married again. Be that as it may, music and sex definitely ruled the life of this Scorpio.

Born in Genoa on 27 October, Niccolò Paganini left an irrefutable mark on the history of instrumental music and 19th century social life. He was a born leader with extra-ordinary drive and determination. Once he made up his mind to study the violin and discover new and hitherto unsuspected effects that would astound people, nothing would stand in his way. He became obsessed with fame and money, and his relentless ambition translated into increasingly bizarre behavior. Supposedly, he was once invited to play at a funeral, but interrupted the ceremony with a twenty-minute solo concerto. And I am sure you’ve heard the story of him spending eight days in jail for drugging his girlfriend and forcing the abortion of his child. There was even a rumor that he had murdered a woman, used her intestines as violin strings and imprisoned her soul within the instrument. Women’s screams were supposedly heard from his violin when he performed on stage. Always concerned about appearances and to project success and self-satisfaction, this Scorpio demanded unconditional respect and attention.