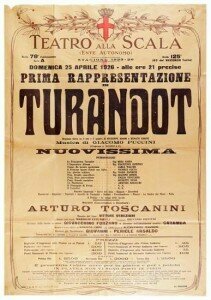 When Arturo Toscanini raised his arms at the Teatro alla Scala in Milan on 25 April 1926, he was getting ready for the premier of an unfinished opera. Turandot, the operatic adaptation of an originally 12th-century Persian epic filtered through readings by Friedrich Schiller and Carlo Gozzi, had been incomplete at the time of Puccini’s death in 1924. 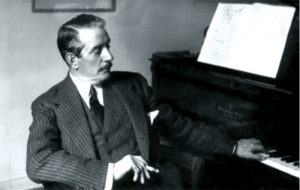 The composer started work on the opera in March 1920, and four years later it was only missing the final duet. However, as a heavy-smoker of cigarettes and cigars, a consultation and “a laryngeal biopsy led to a diagnosis of a walnut sized advanced extrinsic cancer of the supraglottis” on 10 October 1924. Puccini went to Brussels for experimental radiation treatment, and Dr. Louis Ledoux placed a collar containing radium around his neck for several hours a day. His clinical condition improved, and Puccini started smoking again. 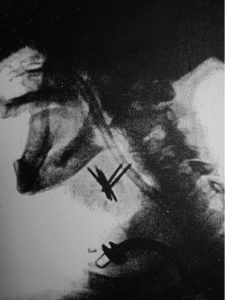 To combat the tumor, Dr. Ledoux inserted seven radioactive needles into Puccini’s cancer. “I am being crucified like a Christ,” he wrote to a friend. Unable to speak, Puccini wrote “I feel as though I have bayonets in my throat.” On 28 November Puccini had a heart attack, and lost consciousness. His heartbeat became irregular and Dr. Ledoux removed the needles and gave him an injection. To no avail, Puccini died on 29 November at the age of 66. He had taken 36 pages of notes and musical sketches for the finale of Turandot with him, and begged Toscanini “don’t let my Turandot die.” 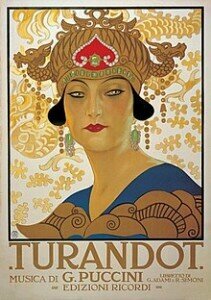 Franco Alfano was called upon to finish the score, but during the premier on 25 April 1926, Toscanini stopped the performance in the third act, exactly on the last note of Puccini’s score. He turned to the audience, put down his baton and said, “Here the performance finished because at this point the maestro died.” The first performances of the opera as completed by Alfano took place the following evening, and there is still some dispute whether Toscanini actually conducted that performance or not.