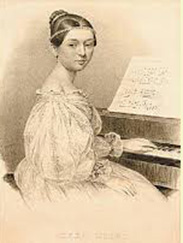 Clara Wieck-Schumann (1819-1896) is considered one of the most talented and distinguished composer-pianists of the 19th Century. In an era when women, apart from singers, almost never performed in public or composed music, Clara did both. Although blessed with outstanding musical talent, character and a sense of mission, her life and career was a “human struggle for self-assertion and survival amidst competition, personal disappointments, devastating sorrow, and the challenges of managing both family and career.” Her father, the ambitious piano teacher and businessman Friedrich Wieck aggressively shaped Clara early life. Her mother Marianne, a gifted soprano and pianist, had left her abusive husband, and following the divorce, Friedrich “reclaimed my Clara on her fifth birthday.” Wieck was determined to capitalize on the popular fashion of young female piano virtuosi, and he aggressively set about turning his daughter into a child prodigy. Instead of attending school, Clara was subjected to a rigorous daily routing of long hours of piano practice, taking long walks in the countryside, and private lessons in music theory and composition. In line with her buddying career as a performer, Clara composed short lyric forms so beloved in that age, which appeared on her earliest concert programs. Frequently called “salon music,” these compositions nevertheless became elegant and expressive pieces in the hand of the best composers.

The girlhood diaries of Clara Wieck detail her education, career, and the musical life she knew. Significantly, however, until she was 18 years old, almost every diary entry was written or supervised by her father. Clara became Friedrich Wieck’s life experiment and project, and his efforts were seemingly rewarded by Clara’s stunning success. She first appeared at the Gewandhaus on 20 October 1828, and a reviewer commented “It was especially pleasing to hear the young, musically talented Clara Wieck just nine years old perform to universal and well-earned applause Kalkbrenner’s Variations on a March from Moses. We may entertain the greatest hopes for this child who has been trained under the direction of her experienced father, who understands the art of piano playing so well and teaches with devotion and great skill.” However, the psychological damage inflicted on his daughter manifested itself throughout the rest of her life in “moments of low self-esteem, anxiety, and depression.” Clara started her musical career in an arena dominated by Eastern European pianists like Chopin, Liszt, Kalkbrenner and Thalberg who dazzled audiences with “inventive new figurations played at unheard-of velocity and a thorough exploitation of the extremes of the piano range in endless theme-and-variations.” Clara’s compositional career reflected this trend, as a number of her girlhood works are cast in variation form based on popular melodies. 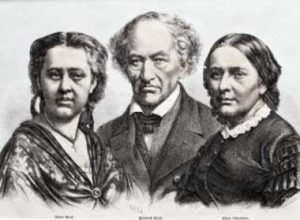 Clara Schumann’s aesthetic preferences changed throughout her life thanks to her encounters with many of the most preeminent musicians and composers of Europe, and to her career as a concert pianist. It has been observed that her compositions shifted from being “performer’s music, like that of the virtuosi of 1830s Paris, to being composer’s music, like that of her husband.” Her composing efforts did closely follow the patterns set by her husband in respect to the genres she chose, “though the voice was distinctly her own.” The marriage of Robert and Clara was a rare artistic partnership, as they studied many works of various composers together. “Her sphere of knowledge was enlarged through their common studies of Bach’s Well-Tempered Clavier, Beethoven’s symphonies, and the chamber works of Mozart and Haydn.” These new experiences also influenced her concert programs, as display pieces by Herz and Pixis and her own bravura variations gave way to works by Bach, Beethoven, Chopin, Mendelssohn, Mozart, Schubert, and Schumann. 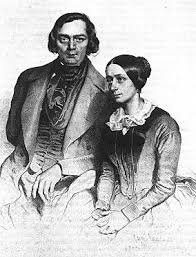 And while Clara writes of “experiencing the greatest joy of her life during the first months of marriage,” serious challenges quickly emerged. Robert’s phases of disabling depression and his ambivalent feelings about her artic career grew more pronounced as time went by. Clara confided in her diary, “My piano playing is falling behind. This always happens when Robert is composing. There is not even one little hour to be found in the whole day for myself! If only I don’t fall too far behind.” Robert was aware of Clara’s frustrations, but he brushed them aside. “After all, Clara also understands that I have a talent to nurture, and that I’m now at my best and have to take advantage of my youth as long as I have it. That’s the only way it can work in artist-marriages; you can’t have everything together.” On various occasions Clara did express her utter joy in her compositions, writing, “There is really no greater pleasure than having composed something and then to hear it.” By the time Robert died, Clara had virtually composed all the works for which she is remembered. And as a mother of eight children, she made a conscious decision to put aside her own creative pursuits to handle financial and family matters.