In Tune Arts
Composers and their Poets: Schubert I
by Maureen Buja October 14th, 2016
Tags: Schubert

A Look at Schubert Vocal Works 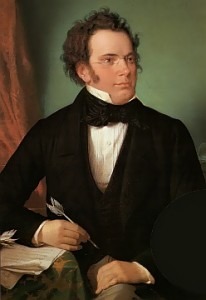 When we look at Franz Schubert’s song output, it is a truly amazing number. In just a few years, 11 to be exact, Schubert (1797-1828) wrote over 600 songs. The poets he set varied from the greatest poets of his time, or of history, to contemporary minor poets who were his friends. It is a testimony to the skill with which Schubert was able to create a new world for the lied that makes this range of poetic sources interesting.

The greatest poet of Schubert’s age was Goethe. Johann Wolfgang von Goethe (1749-1832) was involved in all fields of arts, sciences, and politics. He was a writer and a statesman, a poet in a wide variety of styles from lyric to epic, a dramatist who wrote both prose and verse dramas, a writer in every genre from autobiography to botany to novels. More than 10,000 of his letters are still extant as are nearly 3,000 drawings. He was a literary celebrity by age 25. A recent reviewer of a new biography of Goethe noted wryly that if Goethe had lived during the age of Shakespeare, we’d be wondering if there were one Goethe or if there were many, now confused under one name. 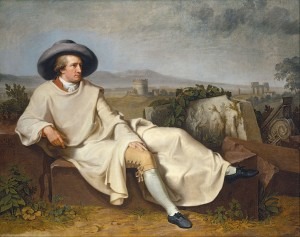 One of the most dramatic of Schubert’s vocal work settings was of Goethe’s poem, The Erlking, Der Erlkönig. It is a dramatic tale of a desperate father, sick child clutched in his arms, riding towards succor. The whole poem is a conversation between the child and his father, and the Erlking and the child. A narrator supplies the opening and closing scenarios. Schubert used the piano as more than just simple accompaniment to the poem. He makes the piano the other character in the drama: it becomes the horse the father is riding, moving desperately towards help.


We hear this as a sublime combination of voice and piano. The piano is the ceaselessly running horse while the singer takes on four different voices: the dry narrator, the calming father, the increasingly hysterical child, and the wheedling Erlkönig. As you listen to the song, you can hear that the 3 actors are sung in different ranges: the child high, the father low, and the Erlkönig middle and in a major key, and. It is through the drama of this setting that the last words come. In the accompaniment we hear that the horse has arrived at its destination. All sound has ceased and then the final phrase: …In seinen Armen das Kind war… tot. (…In his arms, the child was …\… dead.)

Wilhelm Müller (1794-1827) published 7 books of poetry in 11 years and yet today, is best known for supplying the poetry for 2 song cycles set by Schubert. The poet and the composers were born just three years apart and both died shortly after turning 30. Schubert’s song cycle Die schöne Müllerin (The beautiful miller’s daughter) takes the 25 verses of Müller’s original and sets 20 of them, omitting the prologue and epilogue, and three internal verses that have never been set to music by any composer. Schubert’s setting takes us from the happy journeyman miller (think miller as intern) looking for a job, Das Wandern, through his unrequited love for the miller’s daughter, Mein!, to his suicide at her spurning of him for the Hunter, Des Baches Wiegenlied.


We can hear through Schubert’s setting how our journeyman miller matures. The first song is strophic, with five verses, all set to the same music. We get the impression of a fairly simple man. By verse 11, the journeyman miller is confiding to the brook that “Die geliebte Müllerin ist mein!” (The beloved miller’s daughter is mine!). We can hear the joy in his voice. In verse 20, at the end, the miller has drowned himself and the brook, his constant confidant during the song cycle, is comforting the dead man, giving him a soft pillow, telling him to sleep out his happiness and his pain.