In Tune Society
We the People
Revolutions and Music
by Georg Predota September 18th, 2019 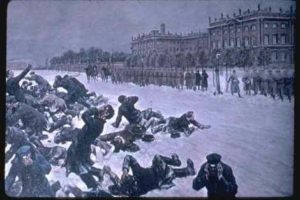 Revolutions have always been part of human history, and they certainly have been central to the formation of the modern world. We frequently use the word “Revolution” in generic ways to describe various phenomena like the “industrial revolution” or the “sexual revolution.” As a historical process, however, it refers to a fundamental and sudden change in political power and political organization. Frequently violent, these populous uprisings are complex processes that emerge from an unstable social equilibrium. The causes of such Revolutions are predictably varied, but as a goal and process they have great transformative powers. And they have certainly inspired some great music; so in this little series let’s explore this musical angle. 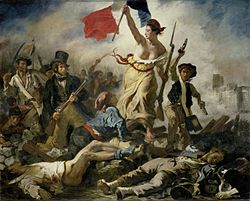 The 1905 Russian revolution sprang from the Russian defeat in the Russo-Japanese war. Political and social unrest spread through vast areas of the Russian Empire, sparked by “Bloody Sunday.” Unarmed demonstrators sought to deliver a petition to Czar Nicholas II on 9 January, calling for limitations on state official power and improvements to working conditions. As the protesters were walking towards the Winter Palace in St. Petersburg, the imperial guards opened fire and moderate estimates suggest that 1,000 people were killed or wounded. “Bloody Sunday” became one of the key events leading to the 1917 Russian Revolution, and Dmitri Shostakovich makes reference to this incident in the second movement of his Symphony No. 11, tellingly subtitled “The Year 1905.” 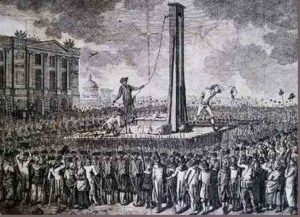 The French Revolution—taking place over the span of 10 years between 1789 and 1799—completely changed the social and political structure of the country. It put an end to the French monarchy and feudalism, and stripped political power from the Catholic Church. And it introduced the ideas of liberty and freedom for commoners, sought the abolishment of slavery and accorded rights to women. 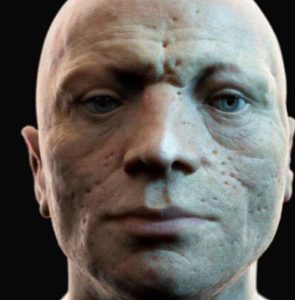 It all started with the storming of the Bastille prison and ended when Napoleon overthrew the revolutionary government. But by definition, revolutions are messy business and the French Government was in constant turmoil throughout the process. As such, it sadly included the “Reign of Terror” responsible for multiple massacres and public executions. The French Revolution and the “Reign of Terror” have inspired numerous works of art, and Francis Poulenc’s opera Dialogues des carmélites is drawn from the story of the Martyrs of Compiègne, a group of sixteen nuns and other members of a Carmelite monastery who were sentenced to death. At the end of the opera the nuns sing the Marian hymn “Salve Regina,” as they are executed one by one. 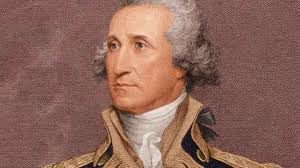 The American Revolution started as a colonial revolt against “taxation without representation” in 1765. Tensions quickly escalated, and Patriots alongside their French allies faced off against the British and the Loyalists. The American Revolutionary War under the leadership of General George Washington would not formally end until the signing of the Treaty of Paris in 1783, but the crucial declaration was issued by the Continental Congress on 2 July 1776. 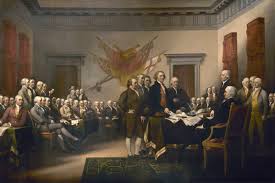 It declared King George a tyrant, and proclaimed the colonies free and independent states, essentially establishing the United States of America. Losing the war and the thirteen colonies was a tremendous shock to Britain, but it was the beginning of a period of prosperity guided by social and political liberalism in the US. Charles Ives had wanted to write an opera on the play “Major John Andre,” a British soldier hanged by the Revolutionists for his complicity with Benedict Arnold. The opera never materialized, but Ives did compile a barrage of patriotic songs from both sides of the struggle in his Overture and March 1776.

Empress Dowager Cixi essentially controlled the Chinese government in the late Qing dynasty for 47 years, from 1861 until her death in 1908. However, the Qing State had been in steady decline for some time, unwilling to modernize China and unable to confront foreign aggression. Revolutionary sentiments started to seriously ferment after China’s loss during the First Sino-Japanese War of 1895, and smaller groups of revolutionaries started to form across the country. The “Xinhai” revolution as it is called, consisted of a series of violent revolts and uprisings that saw the deaths of hundreds of thousands of people. 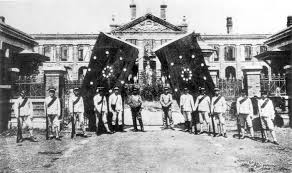 The turning point of this bloody struggle occurred on 10 October 1911 during the Wuchang uprising, also known as the “Railway Rights Protection Movement.” The Qing State had plans to nationalize local railway development projects and transfer control to foreign banks, a move that was violently opposed. The Wuchang uprising forced the abdication of the Last Emperor, six-year-old Puyi on 12 February 1912, marking the end of 2,000 years of imperial rule in China.