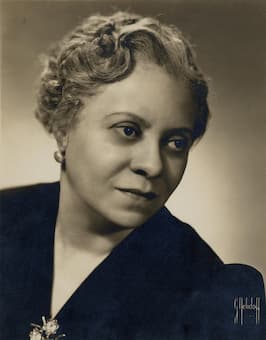 We are now delving into the 20th and 21st century with a few more outstanding women composers who wrote cello music.

Florence Price (1887-1953), an American pianist, composer, organist, and teacher, is not only the first African American woman to gain attention as a symphonic composer; she was also the first to have a work performed by a major orchestra, in her case the Chicago Symphony in 1933.
She began her music studies age 16, as a double major in piano and organ at the New England Conservatory, one of only a handful of schools that accepted African-American students. By 1931 Price moved from Arkansas to Chicago and there she began to write four symphonies. Apparently, she didn’t complete the second symphony and there is quite a story behind the fourth. In 2009 a couple purchased an abandoned and dilapidated house in St Anne, Illinois in order to renovate it. Upon closer inspection, they not only discovered that a tree had fallen through the rooftop; they found a pile of papers and manuscripts—dozens of scores written by Florence Price—thought to be lost, including two violin concertos and the fourth symphony. The dwelling had been her summer home.


Florence Price: “Adoration” for cello and piano (arr. for violin and piano by Elaine Fine)

Price’s music, which numbers over 300 works, is romantic, brimming with modal flavors and African American spirituals and dance. She wrote smaller scale pieces as well, such as two string quartets, a beautiful piano quintet, which has a JUBA third movement, and a prize-winning piano sonata from 1931. Adoration, one of her more intimate works originally composed for the organ, has been arranged for violin and piano, for clarinet and strings, and for cello and piano. It is a poignant work and playable by students and amateurs as well as professionals. Cellist Hannah Holman has written a lovely arrangement of three of Price’s spirituals originally for violin and piano, which we must be reminded, were arranged a century ago in 1917, by Harry Thacker Burleigh. Thoughtful and soulful, they convey the religious flavor of the songs sung by African American enslaved people and these recordings are imbued with the challenges we all experienced in 2020. 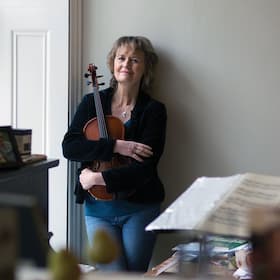 British composer Sally Beamish, born in 1956, has composed in a variety of genres and has been active in theater, film, and television. Beamish studied the viola with Bruno Guranna, was a founding member of the Raphael Ensemble, and she performed with the Academy of St Martin-in-the-Fields and the London Sinfonietta. After moving to Scotland where she was principal viola of the Scottish Chamber Orchestra, she dedicated herself to composing. Featured by the BBC Radio as Composer of the Week in 2012 and 2015, her compositions include symphonic works, music for chorus, two ballets, several commissions, and delightful short pieces for cello.


Gala Water is an eight-minute four-movement work for solo cello. The piece is affecting, and explores the entire range of the cello including the deepest resonant registers, and moves through an undefined rhythmic structure. The piece begins and ends slowly, Lento, and Adagio respectively—gently, and with tenderness. It’s a terrific addition to the solo cello repertoire.

Beamish’s Cello sonata is a more substantial work in four movements in a more contemporary idiom. The Scherzo: Allegro is as expected, quick, but unlike other scherzos it’s powerful and vigorous. A rich, dramatic, and lyrical middle section returns to the quick section and the movement ends with a murmur and fades away. The finale is an authoritative theme and variations.


Beamish is currently the composer-in-residence for the Academy of St Martin-in-the-Fields for whom she’s written Partita, a string octet, and she’s written an intriguing String Trio from 2013 The King’s Alchemist. Her concerto for clarinetist Martin Fröst and violinist Janine Jensen is to be premiered in 2021. 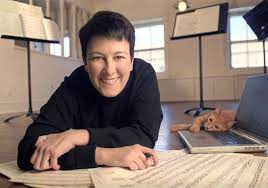 Jennifer Higdon, born 1962 in New York, has the distinction of being one of the most performed contemporary composers, as many as 200 concerts a year. Blue Cathedral, an orchestral work, has been performed 650 times. A 2010 Pulitzer Prize winner for her Violin Concerto and winner of three Grammy Awards for her Percussion Concerto, her Viola Concerto, and her Harp Concerto, Higdon was late coming to music. She learned to play the flute on her own and not until she was eighteen did she receive formal music lessons. A student at Bowling Green State University she was encouraged to try composition studies, despite having to play catch-up with her peers in the music department. While there she met conductor Robert Spano who became a mentor and champion of her music. Despite the late start, she has become a force in the music world with countless commissions from major orchestras and artists, of compositions that include operas, orchestral works, and thrilling chamber music. She just recently completed a 25-year career of teaching at the Curtis Institute of Music. I highly recommend performing Higdon’s Nocturne, which is exquisite and expressive writing and her two movement Piano Trio. The first movement Pale Yellow is poetic while the second movement Fiery Red is explosive, spirited, and robust.

I recently wrote about Libby Larsen, born 1950, a Minnesota Composer who composed a terrific piece for cello and piano entitled JUBA. Libby says the piece is: “a lively dance accompanied by hand clapping. When the Schubert Club {St. Paul MN} commissioned this piece for the London debut concert of cellist Janet Horvath, I thought of the juba, a dance originating in the culture of African-Americans. I wanted to compose a work which carried the rhythmic, improvisatory nature of American music but maintained the formal flow of Western European music…” This is really fun to play. The improvisatory nature of the beginning devolves into the powerful rhythm of the dance. There are some great effects in addition to hand clapping: ponticello sounds (playing on the bridge for a hazy haunting sound), tremolo, double notes, and jazz elements.

Have a listen to Libby Larsen: JUBA with Janet Horvath on cello!

I hope you’ll agree that the above-mentioned compositions and those in the previous articles should be included in every cellists’ repertoire.

Our last article in the series explores a few of the cello works of young women composing today, with resources for further exploration.