I was reading that the key of B minor meant different things to different people at different times. According to some theorists, during Bach’s time it “expressed a quiet acceptance of fate, a submission to divine dispensation, and very gentle complaint.” Always duty-bound, Bach certainly believed that his reward was waiting for him in the next life. As times and musical practices started to change, another theorist suggested that B minor was not suitable for music in good taste. I really don’t know what music he was listening to, but Beethoven apparently considered B minor a “dark and depressing key.” 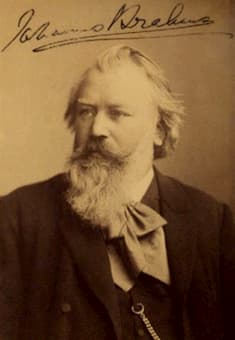 Off hand, I really don’t know too many works by Beethoven written in that key, can you think of some? But don’t worry, many other famous composers wrote wonderful songs in B minor, and I want to start with my all-time favorite, the sublime clarinet quintet by Brahms. I don’t hear much resignation, and Brahms certainly never complained gently. We never know exactly what Brahms is actually thinking in his music, but here he seems to be happily exploring the fantastic sonorities of the clarinet. It is, without doubt, one of the best songs in B minor. 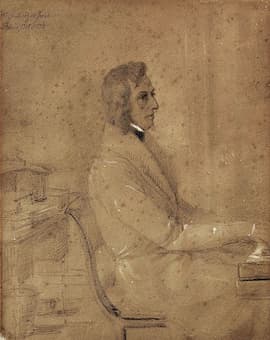 Frédéric Chopin at the piano

Beethoven didn’t like the key of B minor, but Chopin certainly did. He wrote an etude, a prelude, a waltz and the devilish 3rd Piano Sonata in that particular key. And then we also have his first Scherzo in B minor, Op. 20. Scholars are still arguing when that eruption of emotion was actually composed, but we know it was published in 1835. In some early editions it was actually called “Le banquet infernal.” Schumann was also slightly confused by the title “Scherzo,” as he writes, “How should gravity array itself when jest is already darkly robed?” It certainly is a fast and fiery musical world that Chopin composes in B minor, with various pianists hearing a “furious storm of motives,” “tongues of flame bursting upwards,” and “two shattering cries at the top and the bottom of the keyboard.” It certainly doesn’t sound like a submission to divine dispensation, or a very gentle complaint. Rather, as scholars have written, “it resembles the collision of two world. The inner world brings anxiety and menace, whilst the outer world offers us refuge. It transports us to a realm of recollection and dreams.” There certainly is a lot of raging passion in this piece, and I think it is one of the best songs in B minor ever.

Dvořák: Cello Concerto in B minor

The cello concerto by Antonín Dvořák is one of the all-time greatest works in the repertoire; and it is scored in B minor. Dvořák wasn’t very happy with that concerto, and he once wrote, “The cello is a beautiful instrument, but its place is in the orchestra and in chamber music. As a solo instrument it isn’t much good. I have written a cello concerto, but am sorry to this day that I did so, and I never intend to write another.” That comment actually refers to an early cello concerto he had written when he was passionately in love with Josefina Čermáková. She didn’t much care for him, and Dvořák ended up marrying her sister. Almost 30 years later, he did take up a cello concerto again, and Josefina reappears in the lengthy “Adagio” movement of the B minor concerto. The composer quotes his own song “Leave me alone,” a favorite tune of Josefina who developed serious health problems during the composition of the concerto. To me, the music of this concerto does start on earthly grounds but eventually take us into the spiritual realm. Brahms said after hearing this concerto, “If I had known that it was possible to compose such a concerto for the cello, I would have tried it myself!” 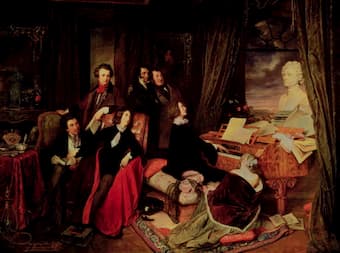 Franz Liszt at the piano

Liszt: Piano Sonata in B minor

I have to be honest, but I really don’t understand the B minor Sonata by Franz Liszt. It seems that I am not alone in this, as this work has inspired countless scholars and interpreters to search for hidden meanings. Some believe it represents a spiritual struggle, and “a soul laid bare, struggling against sin and guilt, but with hope and joy as well.” Maybe it is autobiographical, or as others have claimed, “nothing more than absolute music.” Initially, the B-minor sonata wasn’t well received but it is considered Liszt’s greatest work for the piano today. And as one commentator wrote, “A human being of bewildering complexity, Liszt mirrored in his music an individuality that was part demon, part saint, part aristocrat, part panderer of easy emotionalism.” And maybe that’s the whole point. Of course we can try to understand the work in technical terms, but maybe it’s more important to listen to this fabulous song in B minor from an emotional standpoint? 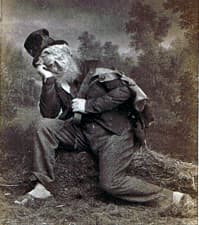 Grieg: In the Hall of the Mountain King

I just love to read fairy tales, and the adventures of Peer Gynt are some of my favorites. The Norwegian dramatist Henrik Ibsen turned Peer Gynt into a theatrical play, which chronicles the journey of the hero from the Norwegian mountains to the North African desert. The play was first staged in Oslo in 1876, and included original music composed by Edward Grieg. 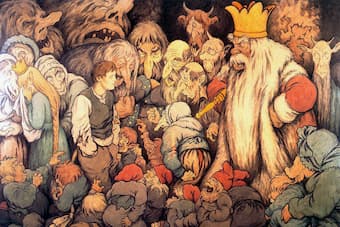 In the Hall of the Mountain King

And the world-famous “In the Hall of the Mountain King,” is one of my all-time favorites in B minor. The song is heard when the title character enters the hall of the troll king in a dream-like fantasy. “There is a great crowd of troll courtiers, gnomes and goblins. The troll king sits on his throne, with crown and scepter and is surrounded by his children and relatives. Peer Gynt stands before him, and there is a tremendous uproar in the hall.” The troll king gives Peer the opportunity to become a troll if he would marry his daughter. After some contemplation, Peer wisely declines the offer. It’s not the spiritual afterworld, but an alternate universe nevertheless. There are many great songs in that key, but now you know my favourite songs in B minor; what is your favourite? We will take a look at the best songs in the key of F Major in our next episode.