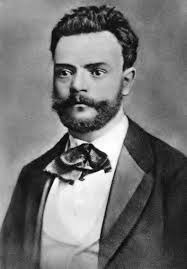 With his Cello Concerto in B minor, Op.104, Antonín Dvořák created one of the all-time greatest works in the genre. Yet curiously, Dvořák had written in 1865, “The cello is a beautiful instrument, but its place is in the orchestra and in chamber music. As a solo instrument it isn’t much good. I have written a cello concerto, but am sorry to this day that I did so, and I never intend to write another.” This curious comment actually refers to a Cello Concerto in A major that Dvořák wrote during the early stages of his career. Inspired by his love for Josefina Cermakova and writing for his close friend Ludevít Peer, who also played in the Provisional Theatre orchestra, the work was left un-orchestrated and merely existed in piano score. It was only at the relentless insistence of his close personal friend, the famed cellist Hanuš Wihan, that Dvořák once again approached a cello concerto almost 30 years later. Dvořák was in his third term as the Director of the National Conservatory in New York when he set to work on 8 November 1894 and completed the B minor concerto on 9 February 1895. Wihan, however, was not entirely satisfied, and attempted to make various improvements, including two additional cadenzas. Dvořák would have none of it and wrote to his publishers, “I give you my work only if you will promise me that no one—not even my friend Wihan—shall make any alteration in it without my knowledge and permission. The form shall be as I have felt it and thought it out. The finale should close gradually with a diminuendo like a breath… then there is a crescendo, and the last measures are taken up by the orchestra, ending stormily. That was my idea, and from it I cannot recede.” Wihan did privately perform the concerto alongside Dvořák, but owing to a number of intrigues and misunderstandings, the work premiered on 19 March 1896 in London, with Leo Stern as the soloist!

Antonín Dvořák: Concerto for Violoncello and Orchestra in B minor, Op. 104, B. 191
The opening “Allegro” expands from two main themes, with clarinets and bassoons introducing us to the first subject. Gradually building in intensity, a ferocious full statement reluctantly gives way to a pastoral bridge passage that announces a largely pentatonic melody first stated in the solo horn. Dvořák considered this second theme to be one of his personal favourites! The soloist enters with a quasi-improvisational interpretation of the first theme, but instead of restating the pastoral character, turns the opening theme into a bouncy folksong. After extensive elaboration of the second subject by the soloist, rising fanfares usher in a development that relies on substantial thematic expansions. The second subject suddenly reappears in a blaze of sound, and the movement comes to a forceful conclusion with a full restatement of the first theme. In the lengthy “Adagio” Dvorák quotes his own song “Leave me alone,” a favourite tune of his sister in law who had taken ill during the composition of the concerto. After the woodwinds, eventually joined by the soloist, solemnly intone a melancholy introduction, the song melody emerges as a chorale for three horns. Imparting the respect of a musical prayer, the music gently drifts towards a long and peaceful sunset. Cast in the form of a rondo, the concluding “Allegro moderato” energetically opens with a brief orchestral introduction. The solo cello sounds the modified main theme from the opening movement, contrasted by new material offered by the orchestra. Alternating tender passages with energetic interjections, the movement gently flows into a tearful epilogue that recalls the opening of the first movement and the song quotation from the slow movement. Once the solo cello has offered its final contemplation, the full orchestra triumphantly takes the music into the spiritual realm. Upon hearing this concerto Johannes Brahms reportedly said, “If I had known that it was possible to compose such a concerto for the cello, I would have tried it myself!”