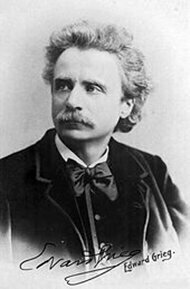 We often forget the connections between composers. When you start to look at who knew who, particularly in the 20th century, connections are not only local but also international.

The Australian composer Percy Grainger (1882-1961) knew the piano works of the Norwegian composer Edvard Grieg (1843-1907) from the music his mother played during his childhood. The English composer Frederick Delius (1862-1934) also knew the music of Grieg. But, more importantly, both Grainger and Delius knew and loved Norway. Delius wrote to Grainger in 1914 saying “Spring always means for me a longing for Norway.”

Delius first went to Norway in the 1880s and met Grieg in 1887 in Leipzig. Whenever he could, he spent his summers in Norway and built a cottage there in 1921. Grainger met Grieg through another friend, who had sent Grieg Grainger’s early vocal publications. Grieg liked them and sent Grainger an autographed photograph. 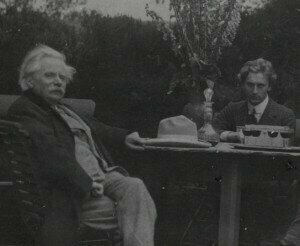 Grainger with Grieg in the summer of 1907

Grainger met Grieg in London in 1906 and Grieg was very impressed with him – not only for his music but also for the fact that Grainger had learned Norwegian and played Grieg’s Op. 66 (Norwegian Folksongs) and Op. 72 (Norwegian Peasant Dances) for him, probably the first time Grieg had heard these works in anyone’s hands but his own. Visiting Grieg in Norway in the summer of 1907, the two laid plans for a performance of Grieg’s Piano Concerto, with Grainger as soloist and Grieg conducting, for the 1907 Leeds festival, to be followed by a folk-song collecting expedition through Norway, and a concert tour through Europe. Grieg’s death in September 1907, just as he was about to leave for England, puts all those plans aside.

1907 was also the year that Grainger met Delius. In London, April 1907, probably at the home of the painter John Singer Sargent, the two met and exchanged music. Upon looking at Grainger’s setting of the folksong Brigg Fair (1906), Delius declared that their harmonies were identical! The next year, Delius wrote his orchestral rhapsody Brigg Fair, and dedicated it to Grainger. 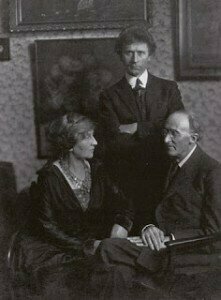 Grainger: Brigg Fair (Monteverdi Choir, Monteverdi Orchestra; Gardiner John Eliot, cond.)
Delius: Brigg Fair: An English Rhapsody (London Symphony Orchestra; Barry Wordsworth, cond.)
In his 1952 essay on Delius. Grainger noted that Delius ‘…did not so much create new ideas and idioms as respond exquisitely to those brought to him…” and we see this in his 1911 work, On Hearing the First Cuckoo in Spring, where Delius turned to Grieg for inspiration. The work is really an homage to the Norwegian composer: Delius uses Grieg’s harmonies, where the chromaticism is in the harmony, not the melodies. More fundamental than that is the source of the melody itself, as it’s one of the folksongs used by Grieg in his Op. 66 collection of Norwegian Folksongs, I Ola-Dalom, I Ola-Kjönn (In Ola Valley, in Ola Lake).

Grieg: 19 Norwegian Folksongs, Op. 66, No. 14: I Ola-Dalom, I Ola-Kjoön (In Ola Valley, in Ola Lake) (Einar Steen-Nøkleberg, piano)
As noted above, for Delius, the idea of spring and the idea of Norway were intertwined and so we have a Norwegian folksong setting what has become a traditional English activity – noting the arrival of spring through birdsong.

Delius: 2 Pieces for Small Orchestra: No. 1. On Hearing the First Cuckoo in Spring (Royal Scottish National Orchestra; David Lloyd-Jones, cond.)
When Grieg met Grainger, he found an international fan of his music; when Delius met Grainger, he found a composer who understood his style completely. When Delius took up the ideas of Grieg, however, he crossed all boundaries, making a Norwegian folksong into a quintessential English sound and feeling.