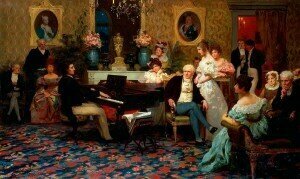 When considering the piano repertoire, and piano instrumental music, we tend to focus on the big works in the canon – the great concertos and piano sonatas, and large-scale works like the Goldberg, Diabelli or Handel Variations, or the Rhapsody on a Theme of Paganini. But many of the composers of these “big” piano works also wrote small, self-contained pieces which explore one or two sentiments, rather than a broad narrative or emotional sweep. Sadly too often dismissed as “salon pieces”, these impromptus, albumblatter, intermezzi, serenades, songs without words, lyric pieces, etudes, nocturnes, morceau and preludes are minute gems of the piano repertoire, miniature musical miracles which offer, in microcosm, a glimpse into a composer’s personal soundworld and compositional language. For the novice listener or player, these piano works in miniature form can provide a bridge to the exploration of more complex or larger piano repertoire and are a wonderful introduction to the idioms and distinctive styles of the composers who wrote them.


Take Beethoven’s late Bagatelles, for example. The opus 126 set display all the characteristics of his instrumental and symphonic music composed around the same time, including the final three piano sonatas, and these brief piano works demonstrate an extraordinary range of styles and emotions, from terse to serene to heroic or angst-ridden. They divert from strictly classical structures, suggesting improvisation and spontaneity in their design and moods.


If the pinnacle of the Classical era was the solo piano sonata, by the start of the Romantic period attention turned to smaller or more fluid works, and sequences of miniatures were very much in vogue. Schubert used the miniature form to exquisite effect in his Moments Musicaux, the two sets of Impromptus, and the Drei Klavierstücke, works whose unassuming titles belie the wonders within. Here we find many elements of his orchestral and chamber writing, his songs and his piano sonatas, including long-spun lyrical melodies, textures drawn from his string-quartet writing, the use of remote keys and strikingly piquant harmonies. The two sets of Impromptus, D899 and D935, remain amongst Schubert’s most popular piano works today, widely performed in concert, either as single works or as a set.

Many composers of the Romantic period wrote works that we call “miniatures” today. Famous examples include Mendelssohn’s Lieder ohne Worte (“Songs without words”), which are the length of a short song and organised accordingly, yet are for solo piano. Chopin had his Preludes, Nocturnes, Mazurkas and Waltzes; Schumann’s Kinderszenen, Romances, Bluemensteuck, and Waldszenen; and Grieg his Lyric Pieces. Brahms called many of his works in this genre “Intermezzo,” a word which translates as “something in-between”. Like Chopin’s Preludes and Schumann’s Romances, they work as stand-alone piano pieces or can be performed as a complete set.


Rachmaninoff was a master of the miniature form and one finds many echoes of his piano concertos in his Moments Musicaux, Morceaux, Preludes and other small-scale piano works.


Composers have continued to exploit the miniature form in piano instrumental music right up to the present day, enjoying the challenge of genre’s concision and the opportunity to explore a few specific ideas within a small form.