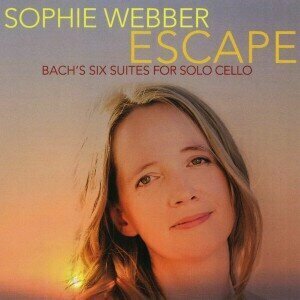 Cellist Sophie Webber’s new album carries the unusual title of Escape. No, this isn’t music of the balmy islands of the Caribbean; these are the Bach solo cello suites, which many would regard as emblematic of a more straitened outlook. Webber, on the other hand, sees them as an invitation to escape today’s noise and craziness to enter into the world of Bach and the cello.

Each movement of each suite conjures up a new world for her: an introspective prayer, child’s play, a bustling marketplace, a courtly romance, a scholarly debate, and dozens of other visions.

Bach: Solo Cello Suite No. 2: VI. Gigue
We spoke to Miss Webber recently and talked about her ideas of Bach. For her, he is forever seeking balance – a veritable maze of yin and yang. Every phrase is a microcosm of life. Yet, at the same time, she notes that Bach and other classics can be difficult for the non-musician to approach. They don’t know where to start down the classical music path – for this, she offers Escape.

Bach: Solo Cello Suite No. 3: V. Bourree I and II
We talked about how the solo cello suites, in particular, were often difficult for the audience to get into. The cellist, even as shown in the video above, is often caught up in their own world of performance and inner world of sound and the audience can only sit outside, held at a distance. She has a solution for that in Escape II.

Bach: Solo Cello Suite No. 4: III. Courante
After completing her DMA in Cello Performance at Indiana University, Ms. Webber went to Chicago where she not only taught in the local colleges but also founded her multimedia performance group, Fused Muse Ensemble. Her interest in multimedia performance came from the work she did in 2009 on her doctoral dissertation on Intertextuality in Britten’s Suite for Solo Cello No. 1, Op.72. She looked at various themes across his opera, such as Christianity, and then sought their realization in his instrumental music. The performance part of her DMA work was created for solo cello, solo dancer, and lighting engineer. The dancer interpreted Britten’s work, as played by Ms. Webber, in the Japanese Nōh style, both as choreographed and as improvisation. In the video, you can see how the dancer uses light and shadow, both casting shadows and hiding behind them, to realize the music.

Bach: Solo Cello Suite No. 5: I. Prelude
After spending some five years in Chicago, she got married and moved to San Diego, where she has established a private cello studio and has had the time to experiment with Bach. Ms. Webber is currently working on Escape II, which builds upon her long exposure to the Suites by augmenting them with different instrumentation and styles. Currently she’s working with a boys’ choir and an adult choir in San Diego, California, to produce a minimalist version of the Solo Cello Suite No. 1. Looking forward, she’d like to have a jazz version, a folk version, an experimental version, and other versions of the suites, but in all, she’s aware that she has to still stay out of the way of Bach in these investigations. She was inspired in this by Vito Paternoster’s arrangements of the Preludes from the Suites for cello, solo voice, and string orchestra. The Prelude from Suite 1, for example, is set to the words for ‘Ave Maria.’

Her Chicago-based Fused Muse Ensemble, which she will carry on in San Diego, has a mission of increasing society’s awareness of today’s social problems through music and mixed media performances. Programs included topics of current issues such as homelessness, where she included those suffering from homelessness in the musical process. Another project she’s working on is a music video on immigration with the Mexican film director Baltazar Peña Ríos, who did the lighting for her 2009 doctoral project.

Bach: Solo Cello Suite no. 6: VI. Gigue
When asked what she did with her spare time, she answered simply with “I have a puppy.” Her Brittany spaniel, Obi, means that she’s forced outside for walks and finds this ultimately a good thing, particularly as she’s in California. She also loves reading, foreign languages and travel, and has recently discovered the Santa Fe art scene.

We can’t wait to hear what Escape II has to offer to the Bach world, and look forward to seeing what new and innovative projects this exceptional and creative musician has to offer.