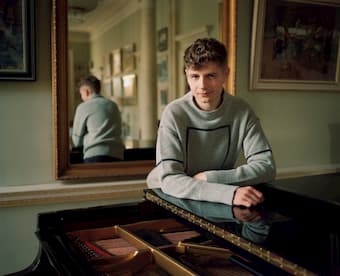 Expressions like “poet of the piano” may seem extravagant, but in the case of the young Russian pianist Pavel Kolesnikov, such a description is entirely appropriate. Since his Wigmore Hall debut in 2014, this articulate (in both music and words) and emotionally intelligent young man has been captivating audiences with his understated virtuosity, profound musical understanding and a remarkably sensitive touch which allows him to bring myriad gradations of sound and sophisticated nuances to almost every phrase and note he plays, particularly in the quieter dynamic ranges of the piano.

His ‘poetry’ extends to his programmes which are intriguing and imaginative, often focussing on a single composer, or, in the case of his Wigmore Hall concert on 26 October, built around a specific theme.

Beethoven’s ‘Tempest’ sonata (No. 17 in D minor Op. 31 No. 2) lends its title to this programme which features music spanning the entire 19th-century, and a little further, including works by Schubert, Liszt and Scriabin. There are certainly storms in this music, but not necessarily of the meteorological kind; the first movement of Beethoven’s Tempest sonata extends beyond mere rough weather into the realm of psychological storms and the entire concert explores music which hovers between hope and uncertainty, anxiety and elegy – an appropriate programme for these corona times, which will resonate with many.

The programme opens with a lullaby by Liszt – the calm before the storm, perhaps? – and is followed by ‘Wilde Jagd’ (Wild Hunt), a Transcendental Étude of wild tempos, formidable technical challenges, and a furious main theme, from which the lyrical middle section offers brief respite. A second Étude from the same opus, ‘Vision’, is sombre and funereal tone, emotionally fitting, perhaps, for a year which has seen the pandemic wreck lives and hopes.

Scriabin’s ‘Danse Languide’ from the 4 Morceaux is full of uneasy harmonies, quirky rhythms and portentous chords. The fifth of his Op. 8 Etudes, marked Affanato (breathless and anxious) is more romantic in style and is a restless nightmare created through dense textures and dark harmonies, its elegant second subject offering a glimmer of hope.

The Sonata-Fantasy in G sharp minor Op. 19 takes its inspiration from sea, beginning with an evocation of the quiet of the seashore, soon interrupted by sombre agitation from the deep ocean, while moonlight pierces the dark sky and dances on the waves. The finale is a moto perpetuo of restless storm-tossed waves of out which rises a heroic melody.

Kolesnikov’s programme closes with Schubert’s ever-popular Moments Musicaux, piano miniatures which portray the paradox of Schubert’s life and indeed of all human existence and the exigencies being alive – from happiness and hope to profound introspection and poignancy, terror and desolation to intimacy and tenderness.