Composers Inspiration
“If music be the food of love, play on.”
Shakespeare and Music III: The Tempest
by Janet Horvath December 20th, 2015 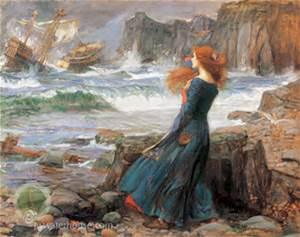 Although The Tempest, written in 1610, is thought to be one of Shakespeare’s greatest works, it had a lukewarm reception. The subsequent ban on the performance of dramas in the theater in 1642 caused The Tempest to disappear into obscurity. Not until the 20th century was there a resurgence of interest. Upwards of forty operas, orchestral works, and songs, a 2010 movie and several works of literature and painting were inspired by the magnificent tale of a great storm, a remote Island, deposed royalty, magic, a shipwreck, and of course love.

“Be not afeard; the isle is full of noises,
Sounds, and sweet airs, that give delight and hurt not.
Sometimes a thousand twangling instruments
Will hum about mine ears; and sometime voices,
That, if I then had waked after long sleep,
Will make me sleep again: and then, in dreaming,
The clouds methought would open, and show riches
Ready to drop upon me; that, when I waked,
I cried to dream again.” 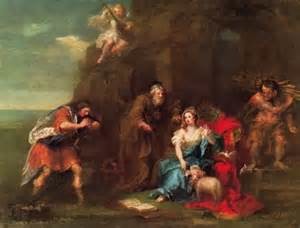 The Tempest—Incidental Music for Vocal Soloists, Chorus, Orchestra and Harmonium, Op. 109 by Sibelius is considered the best score that Sibelius wrote for the stage. In 1925 Copenhagen’s Det Kongelige Teater planned to stage The Tempest. The theater group expressed interest in Sibelius’ music for the production. Written after the famed Symphony No. 7, the complete score, which lasts over an hour, one of his last works, is rich and varied—a breathtaking musical journey of novel orchestral colors comprising thirty-four selections. One only has to listen to the Chorus of the Winds and The Oak to be utterly transported by the haunting flute melody and the magical combination of the harp, flute and harmonium. (The harmonium is a type of reed organ in the keyboard family that produces the sound by generating wind by a foot-operated bellows.) Sibelius used specific instruments to depict the distinctive quality of each of the main characters in the play. The harps and percussion for example, render the complexity of Prospero.

Sibelius also took advantage of a wide variety of different musical styles to entice us, from 18th century Baroque, to 20th to century Neoclassicism and atmospheric, ethereal movements.

Sibelius later arranged the music into two orchestral suites. Although the suites were widely performed and recorded, the entire work was not put on disc until 1992 with the Lahti Orchestra under the direction of Maestro, Osmo Vänskä.

Tchaikovsky: The Tempest, Op. 18
The Fantasy Overture to The Tempest Op. 18 by Tchaikovsky is a symphonic poem based on the play, with a similar structure to the Romeo and Juliet Fantasy-Overture. We orchestral players play the latter work often but I have never performed this beautiful and lesser known work. Composed in 1873, four years after Romeo and Juliet overture, it begins with undulating strings, which depict the calm sea. Soon the majestic voices of the brass gradually surge, punctuated by the cymbals, which portray the tumult of the shipwreck. The love music that follows is gorgeous and sonorous string writing. It begins somewhat more timidly and increases in intensity, the marked lines in the cellos and trombones emphasize overwhelming passion. Like Romeo and Juliet, the music takes us on a journey through the main ideas and emotions of the play rather than depicting the storyline. The piece ends as it began with the calm sea.

Thomas Adès – The Tempest: Act II “What Was Before…”

One of the more modern interpretations of The Tempest is an opera setting by Thomas Adès, commissioned by the Royal Opera, Covent Garden. Dramatist Meredith Oakes wrote the libretto in the spirit of Shakespeare’s poetry but she does not quote it directly. Adès, who has conducted performances of his opera, has been universally praised for his striking orchestration—sometimes dissonant, sometimes beautifully lyrical. The world premiere in 2004 received critical acclaim. “The evening deservedly belongs to Adès, who himself conducts a score as orchestrally lush and evocative as vocally varied and articulate. The cumulative effect is by turns ethereal, witty, incandescent, often ravishing.— Andrew Clements, The Guardian. Other performances include those by the Santa Fe Opera in 2006 and the Metropolitan Opera in 2012.

Beethoven: Piano Sonata No. 17 in D Minor, Op. 31, No. 2, “Tempest”
No discussion of The Tempest would be complete without mentioning Beethoven’s Piano Sonata No. 17 in D minor of 1802, the onset of his middle compositional period, during which other monumental works were written—the third and fifth symphonies and third and fifth piano concertos, Egmont Overture, the opera Fidelio, and two other colossal piano sonatas The Waldstein, No. 21 and Appassionata No. 23. But at the same time, Beethoven was dealing with the anguish of going deaf. It is the year Beethoven sought treatment in Heilgenstadt, and wrote his heartbreaking testament to his brothers; “Thanks…to my art I did not end my life by suicide.” This torment is reflected in the Adagio movement of the sonata. The piece is considered groundbreaking due to Beethoven’s use of motifs— a technique he uses in later works, breaking away from traditional forms. In this case a rolling arpeggio, which begins the piece, is used as an idea throughout the sonata.

Full fathom five thy father lies;
Of his bones are coral made;
Those are pearls that were his eyes:
Nothing of him that doth fade,
But doth suffer a sea-change
Into something rich and strange.
Sea-nymphs hourly ring his knell: Ding-dong.
Hark! now I hear them,—ding-dong, bell.

Composed in 1953, the songs return to a previous serial and spare writing style. It is fascinating to compare Stravinsky’s sparse setting of Full Fathom Five to a lush choral rendering by Ralph Vaughan Williams and the interpretation of more current, mainstream artists such as Elliot Goldenthal who wrote the riveting soundtrack to the 2010 movie The Tempest. William Shakespeare’s poetry and dramatic genius, truly timeless, continues to inspire.