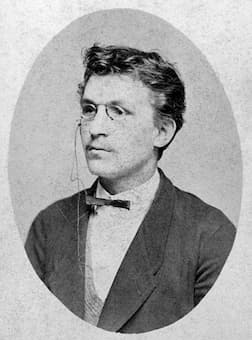 Hukvaldy was described as the largest fortified castle in Moravia belonging to the bishops of Olomouc. In time, a small village began to grow up beneath the castle in the second half of the eighteenth century. The village sported a brewery, a roadside inn, a mill, a distillery, and a chapel consecrated to St. Maximilian. It was also the birthplace of Leoš Janáček, born on 3 July 1854 to the schoolmaster Jiří Janáček and Amalie Janáčková, née Grulichová. One of six surviving siblings, he was christened the next day as Leo Eugen Janáček. A scholar writes, “although he didn’t see it this way, Janáček’s birth as a subject of the Habsburg Empire was not a disaster. For all the many petty humiliations suffered by a minority-language speaker in a multi-ethnic nation, there were undoubted advantages: a stable society, a sound educational infrastructure, a decently paid and decently pensioned job in education, a well-run bureaucracy, good communications and a postal service in which letters arrived the next day.” Janáček was a gifted child in a family of limited means, and he apparently showed early musical talent in choral singing. 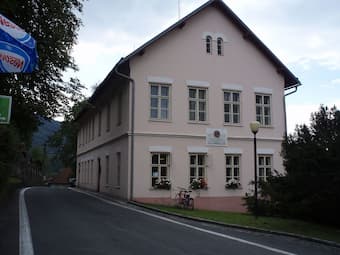 Initially, he was educated in his father’s school, and Jiří also gave him piano lessons. Janáček remembers, “As an eight-year-old boy I battled with many of the Beethoven sonatas on the old piano. Oh, the notes melted into my tears like the bloody spots on the back of my left hand. I’m sure I never got the bass right! And when my father stood over me with a brush in his hands, its bristles would suddenly bore into my left hand. Since then I’ve known that notes should sweat blood when they are written and sweat blood when they are badly played.” By the age of 11, Janáček became a chorister at the Augustinian Monastery in Brno, with Moravia’s leading composer, Pavel Křížkovský, taking a keen interest in the boy’s musical education. In his autobiography, Janáček remembers his arrival at the Monastery. “Fearfully mother and I spent the night in some dark cell… Me with eyes open. At first light, out, out, out! My mother then left me at the Monastery with a heavy step. Me in tears, she too. All alone. Foreign people, not warm-hearted; foreign school, hard bed, bread even harder. No cuddles. My world, exclusively mine, is founded. Everything fell into it.” 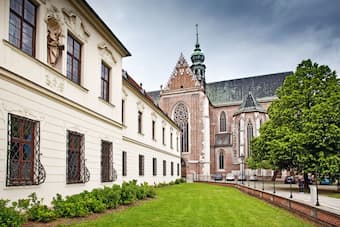 As a ward of the foundation of the Abbey of St. Thomas in Brno, Leoš took part in choral singing under Pavel Křížkovský and occasionally played the organ. A schoolmate described Janáček as an “excellent pianist, who played Beethoven symphonies perfectly in a piano duet with a classmate.” Leoš certainly excelled with the music making at the monastery. He writes, “Lots of music stands, instruments are carried in. A violin for the lame Mr. Baroch, the positive organ in front, our organist and headmaster pulls out the very long stops. Me a treble; there were even oboes and trumpets…They praised me when I doubled once at the positive organ, and once at the Resurrection, when I grabbed the baton and conducted Schnabel’s Regina caeli.” By September 1869, Janáček had completed his basic schooling, including three years at the German Realschule in Old Brno. He received a state scholarship to the Teachers’ Institute in Brno and passed his final examinations, excelling in geography, singing, and organ, in July 1872. 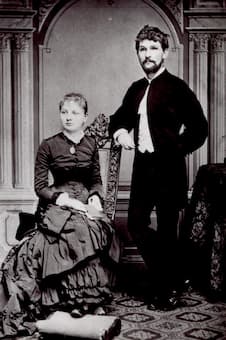 Janáček with his wife Zdenka Schulzová

Janáček took over the monastery choir in 1872 and he performed a wide variety of music at the services, including Palestrina, Lassus, Haydn, and contemporary Czech and German works. His skills as a conductor were recognized and led to his appointment as choirmaster of a working-men’s choral society. He raised the level of the society and moved their concerts out of the taverns into a newly built community hall. Janáček wrote his first choruses, “mostly simple four-part settings of folk texts, and he enrolled at the Prague organ school in 1874. Internal squabbles led to his expulsion from the school, but he was allowed to return and graduated in 1875. Janáček returned to Brno in 1875, and he resumed all his previous activities: teaching and conducting the monastery and men’s choir. Beginning in 1876 he taught music at Brno’s Teachers’ Institute, and among his students was Zdenka Schulzová, who later became his wife. Originally, he had intended to study piano and organ but eventually devoted himself to composition, a passion he officially pursued at the Leipzig Conservatory from October 1879 to February 1880.