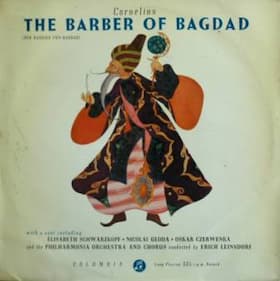 When the writer, critic, poet, translator, and composer Peter Cornelius (1824-1874) approached his close friend and patron Franz Liszt with the idea of writing an opera based on a story from “The Arabian Nights,” Liszt strongly disapproved. Cornelius had written the libretto to the Barber of Bagdad in 1855, dividing the action into two acts of equal length. The comedy is set in Bagdad and features Nureddin (tenor) who is hopelessly in love with Margiana (soprano). She is the daughter of the Caliph Mustapha (tenor), who is advised by the fixer Bostana (mezzo-soprano). We also meet the mischievous hero Abul Hassan Ali Ebn Bekar who manages to unite the couple after various comedic twists and turns. The text was finished in 1856 and the music in 1858. By that time, Liszt was the music director at the theatre in Weimar, and he had changed his mind. The opera premiered on 15 December 1858 in Weimar with Liszt conducting. 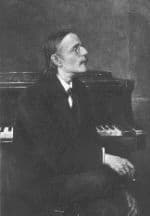 The premiere turned out to be a complete fiasco. Not because of the operatic topic or the music, but because Franz Liszt was engaged in a bitter feud with the manager of the theatre regarding the future direction of the house. The audience was equally divided in support for Liszt and for Dingelstedt, and things got pretty unruly. In the event, Liszt left his position at Weimar, and Cornelius did not hear his opera performed again during his lifetime. Following the first performance Liszt suggested to Cornelius to write a new overture to replace the brief prelude, but before he could work on the orchestration, Cornelius passed away. As such, it was Liszt who undertook that task, and he convinced the conductor Felix Mottl to stage a revised version in Karlsruhe in 1881. Further productions, in various revised forms, were given in Munich and Leipzig, before the original version returned to Weimar in 1904. Today, this charming work can still occasionally be heard in minor German opera houses.