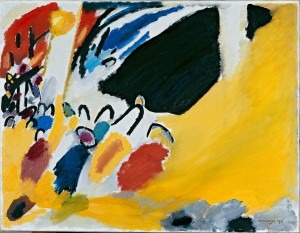 In January 1911, the painter Wassily Kandinsky (1866-1944) was in Munich and went to a concert. He and the other members of the Munich New Artists’ Association heard something that changed Kandinsky’s whole artistic theory. The concert was of music by Arnold Schoenberg (1874-1951) and it prompted Kandinsky to start writing to Schoenberg.

At the time he heard the Schoenberg concert, he was working on series entitled Impression. The first painting he made after the concert was Impression III: Konzert (Impression III: Concert). Kandinsky’s use of the word ‘impression’ referred to paintings that reproduce a direct expression of an internal nature. This picture is not the particular concert he heard, but his overall impression of the music performance. But, the central image of the painting is the piano – the black angular block – so this particular concert is at the heart of this picture.

The piano, shown as the black block, seems to float on a yellow sound. The listeners, shown as circles and arcs are covered in the sound but, at the same time, are focusing on the piano. The difference between art and reality is that we know that the piano would never have been set on a stage so that the performer’s back would have been to the audience, but the identity of the piano – that black monolith – and its position is clear in Kandinsky’s interpretation.

The work that influenced Kandinsky so much at this concert were Schoenberg’s 1909 work, 3 Klavierstücke (Three Piano Pieces), Op. 11.


This work marks Schoenberg’s decisive break with tonality. The first movement may be constructed as a compressed version of sonata form and we may hear a bit of Brahms in the chords, but the organizing element is actually the first 3 notes, which are transposed, expanded, or made part of the vertical harmonies, but which are always present.


The second piece, begins with a dark 2-note repeated figure. It goes from a nearly silent pianissimo at the beginning to grow to a somber greatness.


The final piece kills all idea of structure and turns the powerful chords of the opening into a work of color and rhythms with changing moods. It closes almost meditatively, nearly silent at the end.

Schoenberg and his theories of composition were very influential on Kandinsky and even in this first piece, a reaction to his first hearing of Schoenberg’s defining piano work, sound becomes a painted volume. In later works, Kandinsky depicts music through a web of synesthesia, where sound can be represented by color where a particular timbre (the brassy sound of a trumpet) might take a single color. Colors could be combined to create the visual equivalence of music’s vibrating frequencies. Abstract art meets music head on.