Artists Interviews
Learning from Others – An Interview with David Ludwig
by Maureen Buja April 15th, 2019 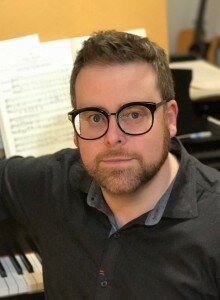 One of the composer-faculty members for this year’s Intimacy of Creativity (IC) will be Philadelphia composer David Ludwig. He’s bringing the Curtis 20/21 Ensemble for Hong Kong University of Science and Tech (HKUST) Music Department’s live workshop for composers and performers. The full name of the workshop, Intimacy of Creativity – The Bright Sheng Partnership: Composers Meet Performers in Hong Kong, gives an idea of how Bright Sheng has been instrumental in driving this unique coming-together of performers and composers. David Ludwig is a composer at the Curtis Institute of Music in Philadelphia, and conductor of the Curtis 20/21 Ensemble.

We spoke with Dr. Ludwig about IC and how the close relationships between young composers and mentors benefitted the composers. As a composition teacher, Dr. Ludwig sees music as a vehicle for artists to get the message, be it political or philosophical, out to the audience. He felt that now it was more important than ever to speak out politically. When asked how he conveyed that to students, he said that students already had messages they wanted to advance. His role as a teacher was to show them the possibilities and to help his students to become the best version of themselves and not a new version of himself. The metaphor of being the person who showed his students a door when they might have only seen a window aptly fit the situation, he said. Quoting Robert Diaz, he said Curtis’ motto was to treat new music as though it were old and old music as though it were new.

Ludwig: Josquin Microludes: I. Milles regetz de vous abandonner … (Prism Ensemble)
Dr. Ludwig was part of the jury that chose the young composers for IC 2019, and he said that it was a matter of finding the best voices. One composer is a Curtis student and the other competitors were familiar to Dr. Ludwig from their appearances in various US and international festivals. He looked for a diversity of voices and styles and found it.

Ludwig: Pleiades: No. 4. Electra, “the brightly shining” (Katherine Needleman, oboe; Jennifer Lim, piano)
Dr. Ludwig saw the IC as an opportunity for young composers to have a chance to stretch their boundaries. Traditionally, university-trained composers use their friends and classmates as their ensembles. In IC 2019, however, the composers will have their music played and critiqued by a very high-level ensemble. Dr Ludwig noted that only 40 performers are admitted each yet to the Curtis Institute of Music, which accepts only 3% of its applicants. Despite this small pool of graduates, he noted that 25% of all principal chairs in orchestras come from Curtis. Joining the Curtis 20/21 Ensemble will be the Curtis on Tour group, which is made up of current Curtis faculty and alumni. For the composers, these two ensembles will give them access to performers on a level few have seen.

Ludwig: Seasons Lost: I. Winter (Jennifer Koh, Jaime Laredo, violin; Curtis 20/21 Ensemble; Vinay Parameswaran, cond.)
When asked what he was looking forward to most from the IC program, Dr. Ludwig said that it was the collaboration between the musicians and the audiences. He noted that composers, unlike film students, weren’t able to do ‘screenings’ of their works, most works generally had only a few performances with little opportunity to rewrite. Also, unlike writers, few composers had editors. The IC program would provide both to the young composers: the opportunity to try their music with the performers, get their feed-back, get feed-back from the audience, and use those reactions to advance their music.

One work of his that will be performed at IC 2019 will be a work originally commissioned by the Forbidden City Ensemble. With the Lilies and the Song and the Stars (2014) was commissioned by the Ensemble to encourage Western composers in the use of Chinese instruments in their music, and Dr. Ludwig chose the Chinese flute, the dizi. The performance will have the original dizi player, Wang Hua, as soloist.

One of the most important of Dr. Ludwig’s works is his choral work, The New Colossus, which was performed at the 2013 presidential inauguration of Barack Obama. The text, by Emma Lazarus, is famously the sonnet that appears on the plinth of the Statue of Liberty:

Not like the brazen giant of Greek fame,
With conquering limbs astride from land to land;
Here at our sea-washed, sunset gates shall stand
A mighty woman with a torch, whose flame
Is the imprisoned lightning, and her name
MOTHER OF EXILES. From her beacon-hand
Glows world-wide welcome; her mild eyes command
The air-bridged harbor that twin cities frame.

“Keep, ancient lands, your storied pomp!” cries she
With silent lips. “Give me your tired, your poor,
Your huddled masses yearning to breathe free,
The wretched refuse of your teeming shore.
Send these, the homeless, tempest-tost to me,
I lift my lamp beside the golden door!”

Truly a political statement for these times.