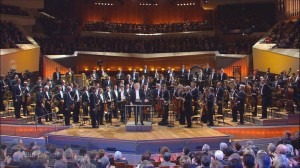 It doesn’t matter how often I’ve been to concerts in the past. The incredible sounds and excitement of an orchestra plowing through the best and most beloved symphonies at full steam still sends shivers down my spine! The sheer range of musical colors and textures, huge dynamic contrasts ranging from delicate hums to the mightiest roars, and variations in tempo and articulation invariably communicate the deepest passions humanity is capable of. To my way of thinking, regardless if we are talking about Beethoven’s best symphonies, the most exciting tone poems by Liszt or various modernist experimentations, the symphony orchestra is the ultimate instrument! A distinctive symphonic sound is shaped by the skillful interaction of all orchestra musicians, and by the conductor directing musical traffic. As such, it’s no easy task to come up with a list of orchestral giants, and the following top five are great music ensembles that shaped the sound of the 20th century, in no particular order. So let’s get started!

Although the New York Philharmonic is the oldest active orchestra in the United States, for my humble ears, nothing beats the gleaming brass sound of the Chicago Symphony Orchestra. The orchestra has been criticized for failing to balance that brilliance, but Chicago and Solti undoubtedly combined in one of the most thrilling and magical musical partnerships of the 20th century.

The sound of the Vienna Philharmonic is frequently described as “plush, warm and rich or sumptuous.” Apparently, it is a combination of playing traditions and a preference for antiquated instruments that shape the distinctive Viennese sound. For example, the orchestra uses the Viennese horns and oboes instead of the more commonly used French varieties. In addition, the orchestra musicians greatly benefits from its daily performances at the Vienna State Opera. According to an orchestra member, this means, “we are always confronted with the most natural instrument, and that’s the human voice. It forces us to breathe with the singers, and to articulate, to phrase like the human voice does.” As such, the Vienna Philharmonic is capable of the smoothest transitions, and the finest modulations of sound. According to some critics, that “makes it incomparable, at least from time to time—whenever it exercises its option to be so.” In the hands of conductors with a distinct artistic concept, the Vienna Philharmonic becomes one of the most exciting sounding bodies of the 20th century.

Critics habitually describe the string section of the Royal Concertgebouw Orchestra as “velvety,” the sound of the bass “golden,” the timbre of the woodwinds “distinctly personal,” and the percussion section as “unique.” There can be no doubt that the RCO is one of the most exciting orchestras in the world. But beyond these technical achievements, the orchestra has developed a distinct sense of musical intelligence. Cultivated under Willem Mengelberg and Bernard Haitink, the RCO is capable of creating a unique atmosphere “that makes you feel that you have entered a very special world.” Peering behind the notes of the best symphonies, the entire orchestra always seems on a quest to reach deeper levels of interpretation. And it is that deeply personal commitment expressed in the orchestral sound that makes the Concertgebouw one of the premiere symphonic bands.

Russia’s oldest symphonic ensemble, the St. Petersburg Philharmonic Orchestra, was founded in 1882. It quickly established a reputation for insightful and discerning interpretations of works from both Russia and abroad. World-famous conductors like Richard Strauss and Serge Koussevitzky guest-conducted the orchestra, and were joined by the explosive firepower of world-renowned soloists like Vladimir Horowitz and the young Sergei Prokofiev. When Maestro Evgeny Mravinsky took over the artistic reins in 1939, he immediately forged an artistic synergy with Dmitri Shostakovich and premiered five of the composer’s symphonies. Ever since, this cohesive group of gifted orchestra musicians has cultivated a warm and smoky Russian orchestral sound. Led by dark strings and an exceptional blending of winds and brass, the St. Petersburg group presents a muscular and frequently expressionless intensity that bathes music in the lavish sounds of mellow passion.

The Berlin Philharmonic is consistently regarded as one of the greatest orchestras of the 20th century. There is the sheer brilliance of the ensemble playing, a uniformity of articulation, the glorious and impeccably calibrated blend between instrumental sections and a staggeringly consistent and warm tone. But what makes this band truly remarkable is not merely its highly disciplined and technically refined sound production, but the fact that the orchestra is not afraid to take risks. “We, Berlin Phil musicians,” explains an orchestra member, “play passionately and emotionally, throwing ourselves into the music without a safety net. Everything we play reflects our personalities, and it translates into the musical extremes of ferocity and those of finesse.” And although the institution has had an extended and powerful tradition, it is also aware that tradition is a living process. Over the years, the Berlin Philharmonic has evolved, developed and adapted to provide a sounding vision of what symphonic music in the 21st century can and must be.