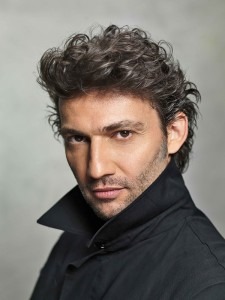 The hottest day in the United Kingdom in nearly 30 years. The day of the Queen’s Speech. And the hottest ticket in town was for opening night of the Royal Opera House’s new production of Giuseppe Verdi’s Otello, featuring German über-tenor Jonas Kaufmann.

Amid constant rumors of Kaufmann’s impending cancellation, pundits debating his ability to deliver on the very challenging role, and a widely communicated change of Iago (from Ludovic Tezier to Marco Vratogna) a few weeks before opening, this was one event the opera glitterati did not want to miss. This opening night carried a feeling of festivity and anticipation that is rarely experienced these days. Every talent agent, music journalist and opera patron wanted to see whether Kaufmann was going to be the defining Otello of our generation.

His voice has the dark smoldering timbre that can light this role on fire. He has the volume demanded by this daunting part. And he has the sort of star appeal we haven’t seen since the glory days of the “three tenors”. 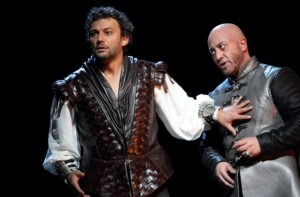 The 47 year old Bavarian delivered a rock solid, high quality, disciplined, often engaging and passionate Moor (without black face – as is now the norm), who shimmered in the lyrical passages. His breath reserves seemed inexhaustible, particularly in the first act duet “Gia nella notte densa”, where he skipped the pauses that many of the greats traditionally took. His moments of intensity were mostly convincing, and he believably portrayed the gullible general’s decline into jealous insanity. But somehow, this Otello still didn’t pop, and Kaufmann is unlikely to prove the defining Otello of his generation. For that, he lacks the savage attack of a Mario del Monaco or the bombastic presence of a Placido Domingo at his height.

Maria Agresta’s Desdemona was vocally precise, attractive and delivered some fine pianissimi in the first and third acts, but she was a far cry from the unforgettable Desdemonas that were matched with the great Otellos of yesteryear.

Marco Vratogna had the lion’s share of the dramatic heavy lifting, which he dispatched with vivid enthusiasm but little vocal discipline. He was mostly barking and frequently flat.

The smaller roles were handily dominated by the excellent Cassio of young Canadian Frederic Antoun. 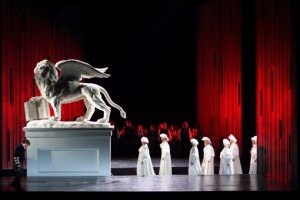 Antonio Pappano masterfully inspired his orchestra, teasing out details and richness that often go unnoticed. The Royal Opera Chorus was nuanced, dynamic and ebullient. This extraordinary chorus will raise the temperature of any performance. Particularly noteworthy were the dancers who executed the thrilling fight scenes (Fight Director Ran Arthur Braun).

Director Keith Warner and set Designer Boris Kudlicka had some good ideas, especially in the first act, where the shifting set segments dramatically simulated the sensation of the drunken crowd. The latticework of the walls – occasionally redolent of North African architecture – also was used to good effect. By the second and third act, however, direction and design descended into provincial territory, with an oversized St. Mark’s Lion pointlessly dragged across the stage, only to re-appear (at least I assume that’s what it was), in a destroyed condition in an underutilized storage room next to Otello and Desdemona’s bedchamber. The bedchamber itself looked like a rather standard deluxe room in any up market contemporary hotel, and nothing like what one would expect for the hero of Cyprus. Costumes were period, other than Otello’s final appearance in a cloak that looked like it had been borrowed from a Harry Potter wizard.

This sold out operatic evening was satisfying and at times exciting, and the audience rewarded the cast accordingly. But the most memorable Otello of our generation it was not.