Features
Musical Giants of the 20th Century: Flutists
by Oliver Pashley May 21st, 2017 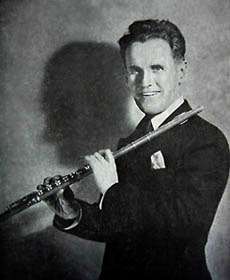 One of the first flute soloists to grace worldwide stages was Marcel Moyse (1889-1984), paving the way for many great flute players of the twentieth century. Born in the east of France at the turn of the century, he moved to Paris at a young age to live with his uncle. After a successful few years studying at the Paris Conservatoire, he toured the United States for the first time in 1913, returning there throughout his career, including performances at the Tanglewood Festival and on N.B.C. Radio in New York.

The Trio Moyse, comprising Marcel, his son Louis, and the violinist Blanche Honegger, recorded and toured extensively, and while we have comparatively little of Moyse of record when stacked up against some of his successors, his legacy as an active teacher and fiercely brilliant soloist lives on.

A keen teacher, Moyse was a professor at the Paris, Geneva, and Quebec conservatoires, and chances are if you’re a flautist you will have encountered at least one of Moyse’s books of études at some point in your studies. He was a founder of the Marlboro Music Festival, now a renowned summer festival headed by Mitsuko Uchida. 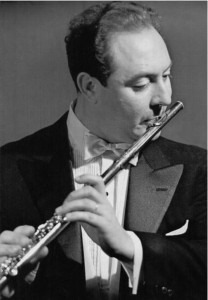 Speaking of Moyse, Jean-Pierre Rampal (1922-2000) reputedly said that he ‘unlocked a door that I continued to push open.’ One of the most famous flute players of the last century, the presence of the flute as a solo instrument on the concert platform is largely credited to French flautist Jean-Pierre Rampal.

Originally from Marseille, learning with his father, himself the professor of flute at the Marseille Conservatoire and principal flute of the Marseille Symphony, Rampal fled Marseille in 1943 to avoid forced labour under the Nazi occupation of France. He made his way to Paris and began studying at the conservatoire from January 1944.

Four months later, he scooped a first prize at the conservatoire’s annual flute competition. In 1945, his career took off after being asked to perform the Ibert concerto (written in 1934 for Marcel Moyse) live on French National Radio.

Rampal toured extensively around the US and Europe, and at the height of his fame even made an appearance on The Muppet Show. He had a long-standing duo partnership with harpsichordist Robert Veyron-Lacroix, and collaborated with others including Isaac Stern and Mstislav Rostropovich. He was made professor of flute at the Paris Conservatoire in 1969, a post that he held until 1981.

Rampal’s recordings were many and diverse. His early recordings of baroque works helped feed a new interest in the genre, and between his close work with the Erato and Sony Classical (then CBS) labels, there are hundreds of recordings to which Rampal put his name. 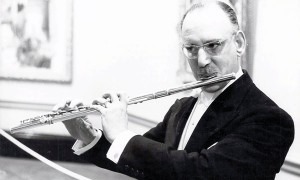 Before Geoffrey Gilbert (1914-1989), wooden flutes were still the order of the day in Britain. Gilbert fundamentally changed the approach to flute playing in Britain, incorporating stylistic aspects of playing showcased by players such as Marcel Moyse into his own; this included a change in articulation and embouchure shape, and a more liberal use of vibrato to achieve a wider range of tone colours.

He gave the British premieres of concerti by Ibert, Nielsen, and Jolivet, and was a founding member of the Wigmore Ensemble.

Well-loved as a teacher, Gilbert was head of wind studies at the Royal Northern College of Music in Manchester from 1957 to 1969. Shortly after leaving his post there, Gilbert moved to Florida in 1969 to become Director of Instrumental Studies at Stetson University. He still gave masterclasses elsewhere in the US and Europe, where he is still remembered by many as being a meticulous but extremely caring teacher. 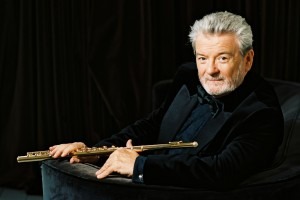 Hailing from Belfast, perhaps the most famous flautist around today is Sir James Galway. Known as ‘The Man with the Golden Flute’, his success is a phenomenon similar to that of Jean-Pierre Rampal a few decades earlier. He has sold over 30 million recordings, and continues to tour regularly, often performing duets with his wife Jeanne. In addition to his solo work, he has played with the Royal Philharmonic and London Symphony Orchestras, the Orchestra of the Royal Opera House, and from 1969-1975 was principal flute of the Berlin Philharmonic.

Flutewise, the charity which supports young flautists, is headed by Galway, and he is an ambassador for the UK charity National Foundation for Youth Music. To celebrate a mind-boggling discography, and his work in the arts in general, Galway was honoured with the Gramophone Lifetime Achievement Award in 2014.

You may even have heard Galway’s playing without realising; his is the distinctive sound on Howard Shore’s The Lord of the Rings soundtrack – perhaps the most famous tin whistle solo ever to exist…

James Galway: Suite from The Lord of the Rings