A quick glance at a list of string quartet ensembles active during the 20th century will give you a serious headache! The sheer number and extraordinary quality of a seemingly endless variety of ensembles, repertoires and styles speaks to the continued—or better re-discovered—popularity of this kind of musical expression. And truth be told, I could go on for hours attempting to justify my top 5 selections. Instead, I’d like to get started with one of my personal favorites, the Borodin Quartet. For over seventy years this extraordinary ensemble has been universally recognized for its astonishing interpretations of Russian music. The original formation produced an almost symphonic volume, “and a highly developed ability to phrase whilst maintaining group cohesion.” Since all members—former or current—received their training at the Moscow Conservatory, the Borodin Quartet has shared a common legacy of penetrating musicianship and technical excellence over time. As a noted critic suggested, “here we have not four individual players, but a single sixteen-stringed instrument of great virtuosity.” The Borodin Quartet had an intensely personal connection to the chamber music of Shostakovich since the composer supervised the study of each of his quartets with the ensemble. You simply can’t get closer to a definitive interpretation! 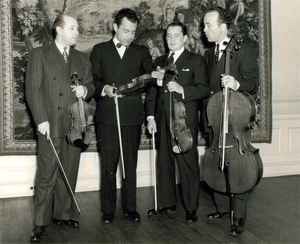 For a number of commentators, including myself, the Budapest String Quartet stands at the point of origin of the modern professional ensemble. Founded in 1917 by members of various opera orchestras that had ceased playing because of World War I, the ensemble attempted to live entirely on the proceeds from its concerts. To accomplish that task, they set out very specific rules. “1) All disputes, musical or business, were to be resolved by a vote. 2) Players were not allowed to take engagements outside the quartet. 3) Players were paid equally, 4) No wives or girlfriends were permitted at rehearsals or discussions.” These rules apparently served them well, since over the next 50 years, the Budapest String Quartet—in various formations—was highly influential on both sides of the Atlantic. It published an extensive catalogue of recordings with Columbia and RCA and sold millions of copies. It performed in many famous venues and festivals, and through participation in Radio broadcasts set the stage for the string quartet to become an article of mass appeal. 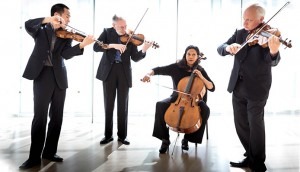 As a young and aspiring music student I had a rather ambivalent relationship with the music of Béla Bartók. As a composer, he seemed to populously flit with every possible musical and artistic influence coming his way. Unlike Stravinsky and Schoenberg, he seemingly lacked a focused artistic personality. And then I discovered a 1949 recording by the Juilliard String Quartet, which decisively changed my way of thinking. Founded in 1946 as a resident teaching and performing ensemble, the Juilliard quickly became the prototype of musical groups resident at various institutions. Initial performances were astonishingly successful, and marked by vigorous and dynamic playing. Above all, audiences were treated to an almost overwhelming intensity that attacked the music without taking prisoners. Interpretations of Bartók have softened over the years, but the original Juilliard String Quartet recordings unequivocally announced to the world that abstract postwar expressionism was here to stay, and that the contradictory components of Bartók’s style offer the widest possible latitude to performers. In due course the Juilliard have trained some of the foremost musical ensembles including the American, Concord, Emerson, LaSalle, Shanghai, St. Lawrence, Tokyo, and Whitman string quartets. 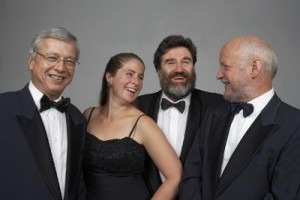 In 1971, four young faculty members from the Vienna Academy of Music banded together and founded the Alban Berg Quartet. Although the repertoire centered on an extended Viennese musical heritage, it also included at least one modern/contemporary work in each performance. Within a short number of years, the ABQ established itself as one of the premiere string quartets in the world. All matters of interpretation, in the true spirit of quartet playing, were achieved by consensus. But what is more, the ensemble achieved a remarkable uniformity of tone among its four members. Producing a warm and inviting, yet rhythmically penetrating sound, the ensemble preferred to make live recordings that won virtually every international recording award on offer. The ABQ disbanded in 2008.

For once, I have absolutely no problems selecting the final member of the string quartet giants. For its adventurous approach to repertory, genre defying collaborations and crossover potential, the Kronos Quartet gets the final spot on my list. Founded in 1973, the ensemble has since released over 50 recordings, commissioned more than 850 works and arrangements for string quartet, and pushed the string quartet envelope into unusual, yet generally exciting directions. For more than 40 years, the Kronos Quartet has been the standard for innovation in the string quartet medium, and “no string quartet has ever been so popular or has had so wide an audience, globally, and culturally.” However, the Kronos Quartet is more than just a group of adventurous and popular musicians. They are a nonprofit organization that raises money for new musical commissions and for educational programs. According to its founder, “It has taken 40 years to be able to get to where we’re at right now, and I want to use every day to propel our music forward and further and wider and louder and softer, and every way it can possibly go.”