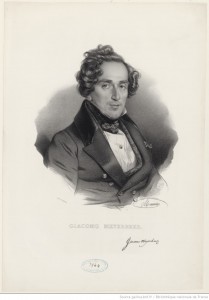 What do you call the massacre of thousands of Huguenot Protestants by Catholic forces on St. Bartholomew’s Day, 1572? In artistic terms, you’d have to call it the most successful opera of the 19th century. When Meyerbeer’s Les Huguenots premiered by the Paris Opera at the Salle Le Peletier on 29 February 1836, it immediately was lauded in the highest possible terms. Berlioz called the score “a musical encyclopedia,” Verdi and Liszt hailed it as a masterpiece, and the normally acidic Heinrich Heine compared it to a “Gothic cathedral, whose slender columns and colossal dome seem to have been raised by the bold hand of a giant.” And Richard Wagner, who would subsequently change his mind in his notorious essay “Judaism in Music,” was originally full of praise for his mentor. “Meyerbeer,” he writes, “produced a history of hearts and feelings; he destroyed the shackles of national prejudice.” 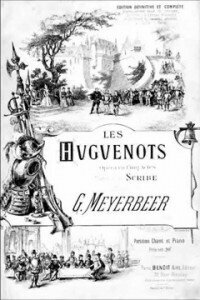 In the event, the premiere performance of Les Huguenots was one of the most lavish productions ever seen, costing the astronomical figure of 160,000 francs. This is not surprising, as grand opera is a world onto itself, demanding lavish resources and idiosyncratic vocal styles. Yet more than anything else, it demands patience from the audience. Meyerbeer, it has been suggested, “worked on a huge canvas, giving the impression that history itself was invading the stage.” And while the opera is full of showpieces for the vocal leads, we get the sense that individuals are mere puppets within a larger social construct. That social construct emerges from a “complex network of recurring melodic shapes, harmonic relationships, rhythmic patterns, and instrumental timbres.” Berlioz, sitting in the premiere noted among other musical innovations, the appearance of an intermediary form of singing, located between aria and recitative. And while Meyerbeer seemingly had his finger on the musical pulse of France, Robert Schumann was outraged by Scribe’s profanation of the serious religious subject matter of the St. Bartholomew’s Day massacre with his inclusion of the love story between Raoul and Valentine as the opera’s centerpiece. Just goes to show, you can’t please everybody!